Home
Tech News
​As Well As Dynamaxing, You Can Gigantamax Pokémon In The New Games

​As Well As Dynamaxing, You Can Gigantamax Pokémon In The New Games

We already knew one of the new features coming to Pokémon in Sword and Shield was Dynamaxing, a phenomenon that would let you grew pokémon into monstrously large versions of themselves. Now Game Freak has revealed that a select few pokémon can also Gigantamax – turning into humongous creatures with special G-Max attacks.

Gigantamaxing is especially rare because not only is it only available to some species of pokémon but also only some pokémon within that species can do it. So, for instance, you could catch a Drednaw that can Dynamax but not Gigantamax. You’ll only be able to catch Gigantamax pokémon on Max Raid Battles, but they’re not on every raid so, basically, you’re going to have to search long and hard to find them all.

Game Freak also revealed four new pokémon with the Gigantamax news. One of them is a gorgeous little puppy called Yamper that is like a dog crossed with a dynamo. According to its description, “Yamper has an organ in its body that generates electricity, and this organ is activated when Yamper runs around. Yamper can’t store the electricity it generates, so it’s often seen running around with electric sparks crackling around it.” Like all good dogs, Yamper likes to play fetch and so if you throw a pokéball in the wild and miss your target your wee dog pokémon will fetch the ball back. 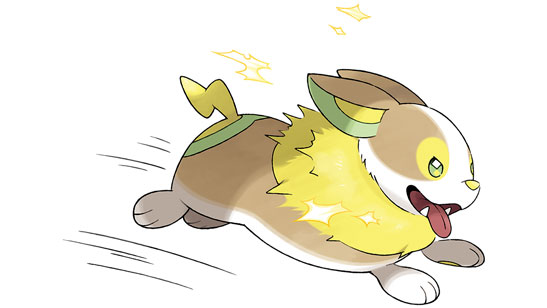 The other pokémon revealed were Rolycoly – a ball of coal that has an ability called Steam Engine, that gives is a speed boost when hit with fire or water attacks – and Duraludon, a stocky pokémon made out of light, durable metal. Apparently people used to keep a Rolycoly in their homes and they would collect the coal that fell off its body to keep their fires going.

I’m really looking forward to playing pokémon on Switch, and pokémon like Yamper and Wooloo the sheep do look wonderful. But I’m not particularly excited for Dynamaxing and Gigantamaxing. I don’t know how exciting ‘pokémon but bigger’ really is.

Are you excited for Gigantamaxing? Let us know on Facebook and Twitter. And, while you’re at it, why not check out the GAMINGbible Snapchat?