A husband and wife were shocked to stumble upon a spider eating its tea – and that’s because it was chowing down on an entire pygmy possum, which as you can imagine, made for particularly grim scenes.

Justine Latton and her husband were enjoying some time in Tasmania’s Mount Field National Park over the weekend when they saw the huge huntsman spider devouring the possum.

Latton then posted a photos of the incredible scenes on the Tasmanian Insects and Spiders Facebook page, sharing the sight with other nature lovers. 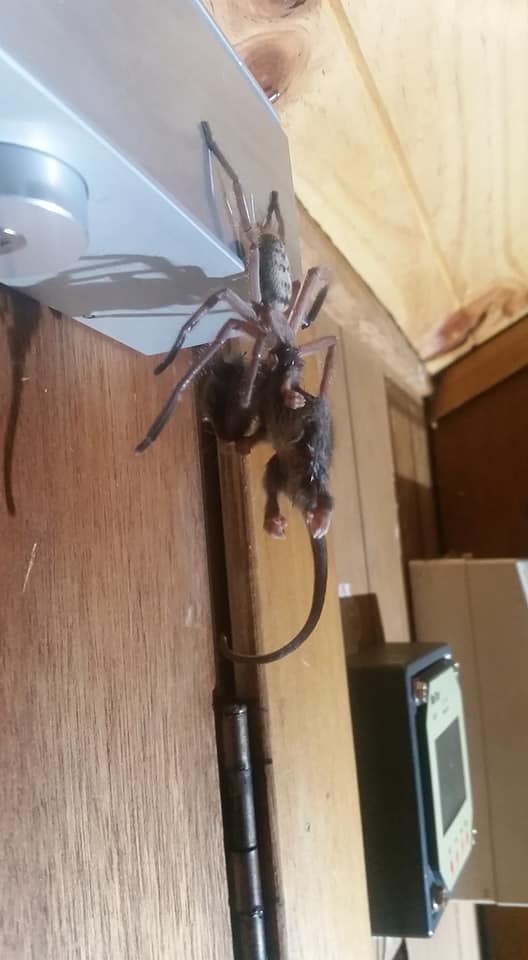 We should probably stress that the spider is chowing down on a possum which is actually quite small compared to other species – according to Tasmania Parks and Wildlife Services, their bodies grow to just 5-6.5cm, and they weigh a mere 7g.

But it’s still far bigger than the spider’s main body – it would probably be like one of us eating a door or a sofa. Or something like that, IDK.

The huntsman spider with the pygmy possum. Credit: Facebook/Justin Latton

Many people on social media, however, definitely weren’t smiling.

Another said: “Omg… I can’t even… I wanna scream.”

Others were simply rooting for the very hungry spider, which someone said was ‘one strong spidey‘.

“Even though it’s just a pygmy possum it’s still impressive the huntsman got him,” one Facebook said.

Someone else commented: “OMG what a once in a lifetime photo opportunity… I would be so freaking excited if I were lucky enough to witness this… Not scary at all just interesting and such a mystery to how this all went down… Would have been amazing to see from the onset of battle… Would have been so hard to not step in and help the little possum though… RIP little buddy.”

Another wrote: “Justine this is so interesting. Nature never ceases to amaze me.”

Justine and her husband aren’t the only ones to have interrupted a huntsman midway through its meal.

Melanie Jade Ottaway found one in a similar set-up at her home in Beerwah, Queensland, as she was prepared to tuck into her Sunday dinner last year.

The 29-year-old and her partner, Troy, soon realised that they had an unwanted dinner guest in the form of a huge huntsman spider who was settling into a main course of a gecko.

The spider measured around five inches across, and was sitting on the glass door that led out to their decking.

She grabbed her camera and caught the epic tussle on camera – and, as you can see, the spider definitely won.