Home
Tech News
​‘Two Point Hospital’ Is Coming To Consoles, And It Plays Brilliantly On A Controller

​‘Two Point Hospital’ Is Coming To Consoles, And It Plays Brilliantly On A Controller

Two Point Hospital, the spiritual successor to the old Bullfrog classic Theme Hospital, is going to be coming to consoles in late 2019. While management games tend to live in the domain of PC gaming, what with all their windows, sub menus, and tooltips not best lending themselves to console gaming, I’ve played a few hours of Two Point Hospital on PS4 and Switch and it’s extremely playable on a controller. Itchingly playable. I’ve been hooked on the game since my first hit of hospital administration.

In Two Point Hospital you are a hospital administrator. It’s your job to turn your hospital into a money-making machine. You do manage everything from the top down – you build rooms, buy equipment, hire doctors and the other staff to people your facility, and, if you want to go really granular, adjust the prices of the vending machines. You need to make sure there’s enough of everything your hospital needs for your patients to be diagnosed and treated quickly, while also not overspending and sending your hospital into bankruptcy.

If you’ve played games like Theme Hospital, Theme Park, and more recent games like Production Line and Planet Coaster you’ll be familiar with what’s being asked of you. You’re forever looking for the perfect efficiency sweet spot. Are there queues of patients waiting outside your GP’s office? Maybe you need to build a few more offices and hire more doctors to cut down the wait on getting a diagnosis. Are your halls full of clowns waiting for their Jest Infection to be cured… Ah, yes, so Two Point Hospital doesn’t have you curing cancer or burst appendixes, every illness is a joke often born from an excellent pun. You’ll be treating patients suffering from Misery Guts, Denim Genes, Floppy Discs, and Mood Poisoning. 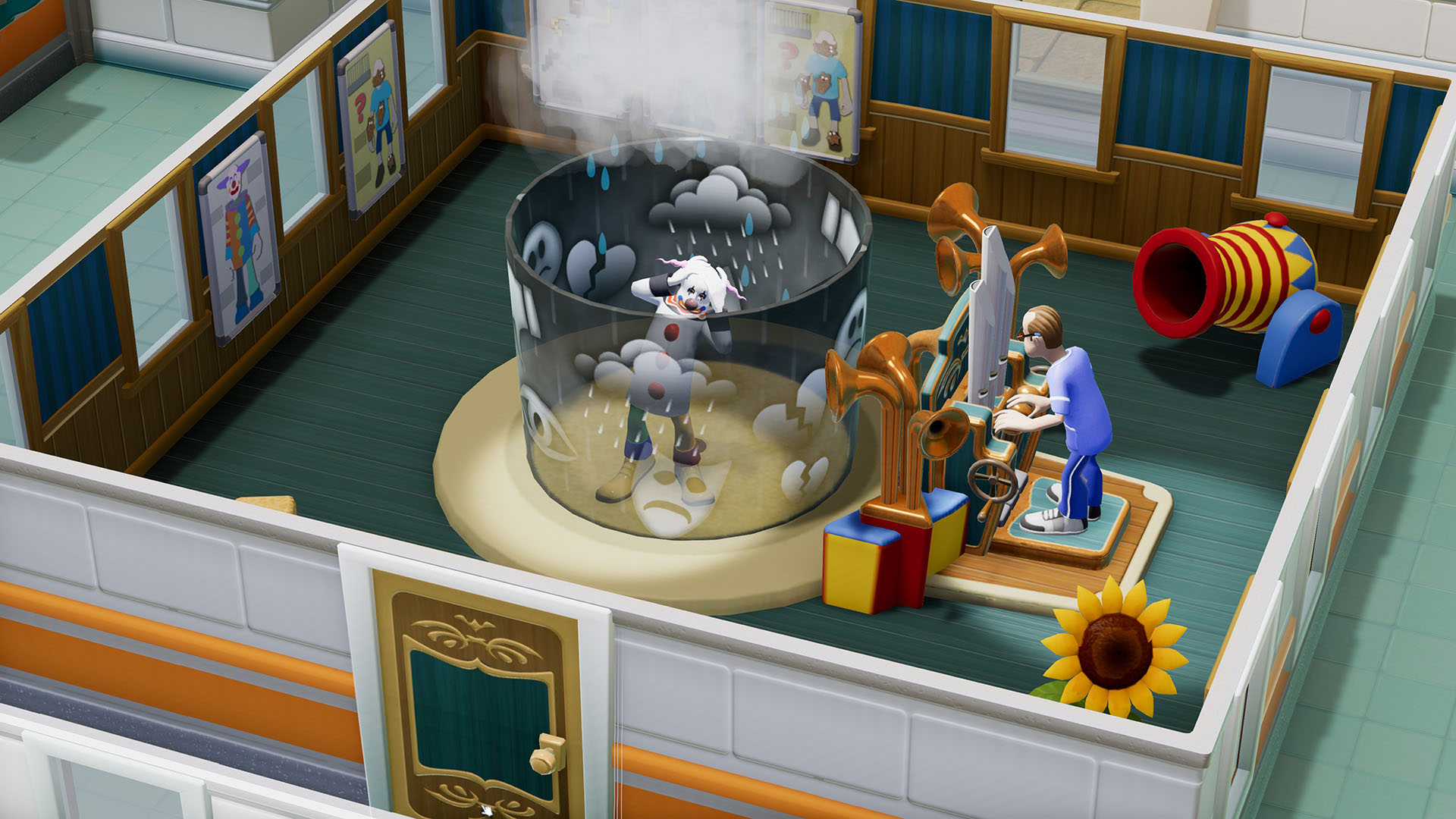 Nothing like upsetting a clown to brighten your day

Many illnesses can be cured with a pill dispensed from your pharmacy but more extreme illnesses like Light Headed (where a patient’s head has been replaced by a light bulb) need special equipment to be treated. In that illness’ case, the patient has their head unscrewed and a new one screwed in. The Jest Infection, that sees patients wandering your hospital dressed as clowns, is cured by tricking the patient to enter a small circus tent that is in fact a room designed to bum them out. They’re shown a string of miserable images and played sad music, all in the hope to level out their good humour.

All 119 if these, frankly, inspired illnesses will feature in Two Point Hospital on console. That’s including the illnesses from the two expansions, as all that content is included as standard in the console release. That means there will also be 21 hospitals for you to play through, all of which can be three-starred. In Two Point Hospital, each level of the campaign sees you moving into a new hospital that has its own unique challenges – such as not being able to hire any doctors with specialty training or an influx of patients needing specialist treatment. If you complete the first set of objectives you’re given then you gain a one-star rating and can move onto the next hospital, but, if you stay, you are given more objectives that can take you up to two-stars and eventually three. Each star rating awards you new equipment and kudosh that you can spend on new items. All told, this means there’s a huge amount of hospital administration to be done. 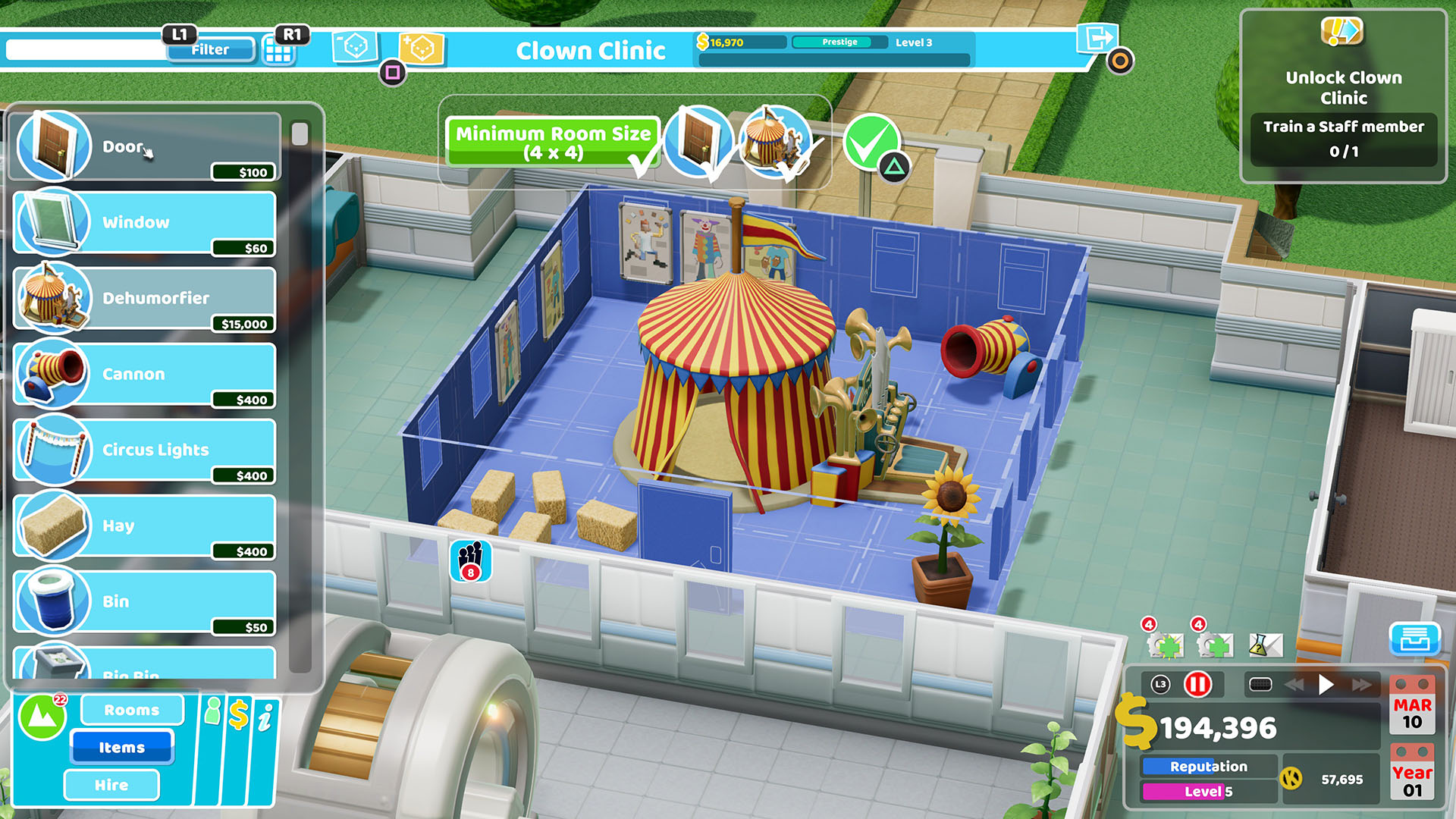 Placing rooms in your hospital is surprisingly easy with a controller

Now with so much to control it might seem like that could be overwhelming in a transition to console but the team has done a fantastic job adapting everything you need to manage to a controller. Playing on PlayStation, most of your important menus are alloted to the Square button. Pressing Square moves your cursor to a set of panels, the first is a list with ‘Rooms’, ‘Items’, and ‘Hire’ on. Pressing those takes you to a list where you can start select a room type to start placing in your hospital, items you want to place around your hospital, or staff hires you want to make. When it comes to placing rooms, it’s easy to drag out the space for the room, select items from a context-sensitive list, and a tap of triangle completes the operation – popping your completed room into existence. You can tap the left thumbstick at any point to pause the game, too, if you need to slow things down.

While most actions are intuitive and quick to pick up, I encountered a few minor gripes. One submenu lets you apply different overlays to your hospital – letting you see who in your hospital is thirsty, unhappy, or hungry, for instance – that can guide you to where you need to put down new vending machines, or items that will entertain patients. The menu is a grid of icons that you can select. If you know what each icon means then it’s easy to use but that’s learned through trial and error and seeing the symbols elsewhere in the game – in the PC you can hover over the icon for a tooltip of what the overlay does, which doesn’t appear to be the case in the console version. Another issue, and this really is a small thing, is the symbol for slow motion. There are three play speeds you can switch between with a tap of the touch pad – slow, normal, and fast. The icon for slow is a rewind arrow, which doesn’t make a great deal of sense, as it doesn’t send your play backwards. But, as I said, this is a really minor issue. 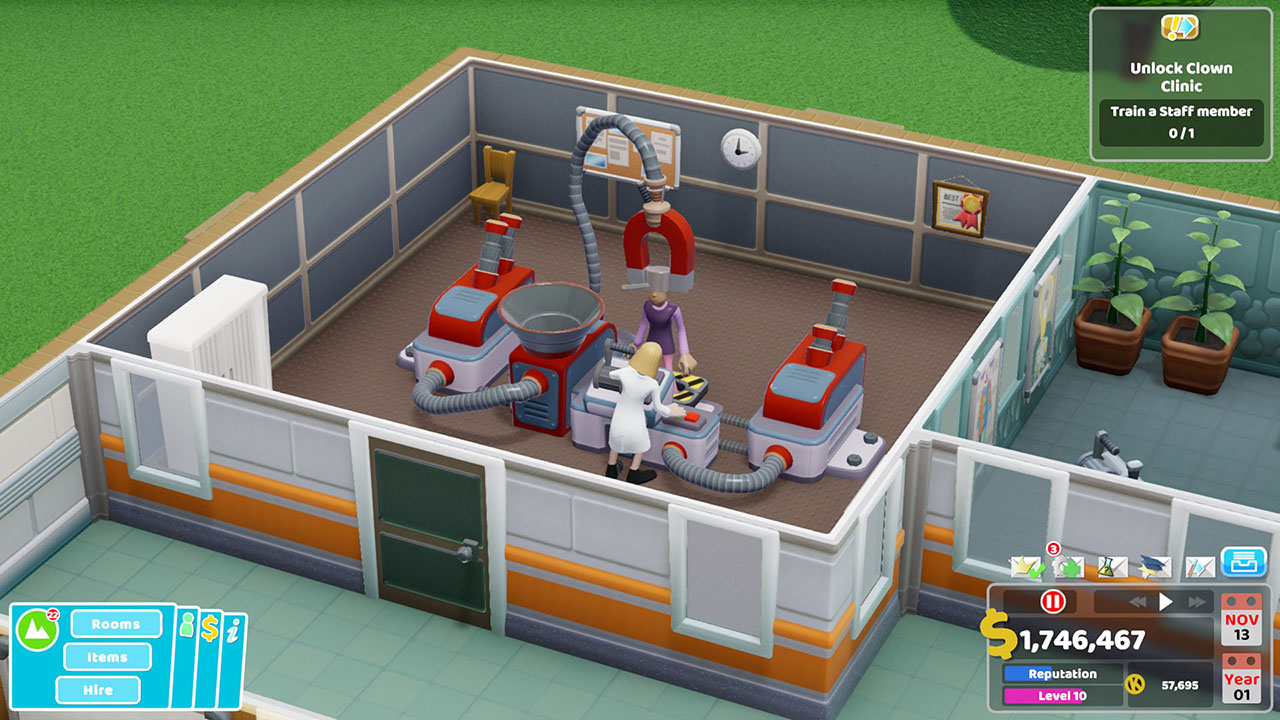 Cure pandemic with an electromagnet

On Switch, playing in handheld mode, Two Point Hospital similarly adapts well – and I can’t wait to be able to build hospitals on long train journeys – but an issue I ran into is that the text is very small. However, this is not a problem unique to Two Point Hospital, I’m playing Dragon Quest Builders 2 on Switch at the moment and there often times I have to squint at the screen to read the small text.

All in all, when Two Point Hospital comes to console in late 2019 it’s going to be an easy game to recommend. Everything that made the hospital management game a success on PC is correct and present in the console version. And, in a summer where I’ve been playing management games like Satisfactory and Production Line which fast become so complex it’s difficult to hold all the functions of your facility in your head, Two Point Hospital has an excellent difficulty curve that certainly increases to the point that your hospital is a hive of activity but I never find it becomes so complex that I lose track of what I’m doing. What I’ve played of it so far, both on the console and now on too many late nights on PC, has never stopped being enjoyable.

Will you be picking up Two Point Hospital when it comes to consoles? Let us know on Facebook and Twitter. And, while you’re at it, why not check out the GAMINGbible Snapchat?