A man was shot dead in January after trying to enter Area 51, the top-secret desert military base in the US, a document from the Nevada National Security Site (NNSS) reveals.

The news is resurfacing in relation to concerns that a crowd of people will storm Area 51 later this year as proposed by a Facebook event entitled ‘Storm Area 51, They Can’t Stop All Of Us‘.

A press release from the NNSS explained that an man had refused to stop at the security gate and drove around eight miles while in pursuit.

When he eventually stopped, he approached security officials with a ‘cylindrical object’ in his hand.

“After driving approximately eight (8) miles past the security gate, the individual came to a stop, exited his car and approached the SPOs and NSCO with a cylindrical object in-hand. 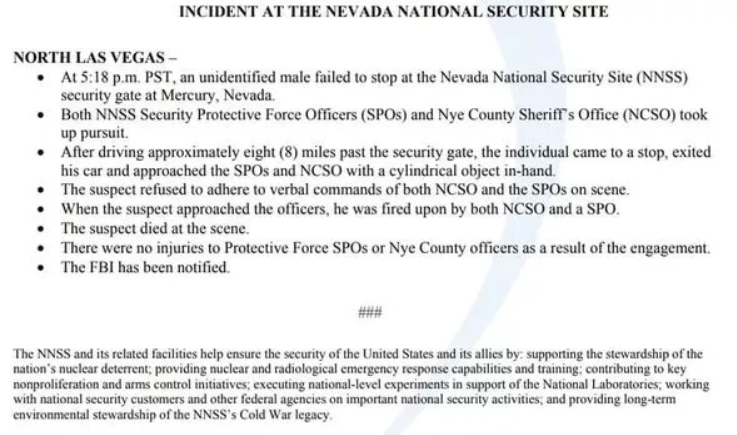 “The suspect refused to adhere to verbal commands of both NSCO and the SPOs on scene.

“When the suspect approached the officers, he was fired upon by both NSCO and a SPO.

“The suspect died at the scene.”

The statement added that the FBI were notified and that there were no injuries to the SPOs or NSCO as a result of the engagement.

The Facebook event, called ‘Storm Area 51, They Can’t Stop All Of Us‘, which is scheduled for Friday 20 September at 3am, has now surpassed one million attendees.

Encouraging the masses to meet up at the mysterious US military site to find out what’s going on there, the event description reads: “We will all meet up at the Area 51 Alien Center tourist attraction and coordinate our entry. If we Naruto Run [an attack inspired by Japanese manga, in which people run with their arms outstretched backwards and heads forwards], we can move faster than their bullets.

Bob Lazar, an American physicist who claims to have worked with extra-terrestrial technology at a shadowy US military base known only as ‘S-4’, has already warned against people trying to enter the site – offering up the stark reminder that ‘the last time someone tried to get in to Area 51 he was shot’.

It is not clear whether or not he was referencing January’s incident. 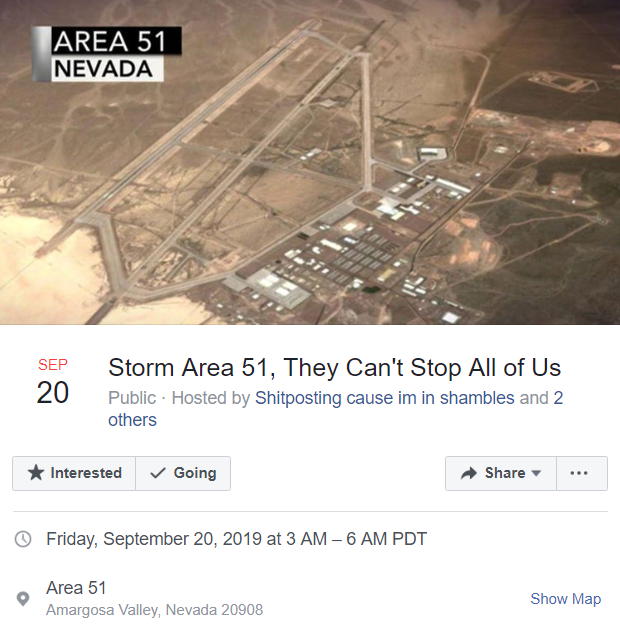 Taking to Instagram with some friendly advice to the ‘Storm Area 51’ crowd, he wrote: “I have to comment on this ‘Storm Area 51’ thing. I do understand it was started as a joke by someone, but there are a number of people who are actually planning on showing up.

“This is a misguided idea. Area 51 is a classified research base. There are no aliens or alien technology located there.

“The only place there was ever any alien technology was at Site S4, south of Area 51 proper. That was 30 years ago.

“S4 may have moved decades ago or it’s possible it’s no longer being used for the project. I do not support this ‘movement’.

“The last time someone tried to get in to Area 51 he was shot. This is not the way to go about trying to get more information.

“What is good, is the interest in the subject – the science and technology. That is what would immediately change the world we live in.”

The US Air Force has also waded in to tell people not to go ahead with the plans, explaining that trying to invade an ‘open training range’ is unsurprisingly a pretty bad idea.

“[Area 51] is an open training range for the US Air Force, and we would discourage anyone from trying to come into the area where we train American armed forces,” US Air Force spokesperson Laura McAndrews said, according to The Independent.

While she didn’t divulge any specifics, McAndrews added ominously: “The US Air Force always stands ready to protect America and its assets.”