According to one eye-witness the ride was stuck vertically, filled with people, for around 20 minutes at 6pm this evening.

Thankfully, staff were able to get it going again and no one was injured.

One visitor to the park tweeted to say: “The Smiler at Alton Towers got stuck just before we were meant to get onto it. 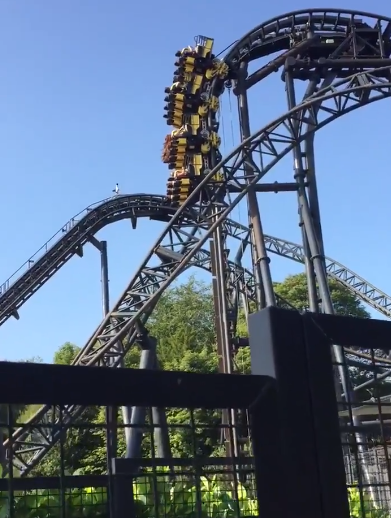 The ride was stuck for around 20 minutes, according to eyewitnesses. Credit: Twitter/Terry Brooks

“There were announcements about technical issues. We were handed out water bottles, waited and decided to leave.

“Went out through the staff exit. People on the ride must have been stuck at least 20 mins.”

Another witness told the Sun: “The Smiler getting stuck on the vertical part is giving me the absolute fear.

“The poor people on that ride must be terrified.”

The ride has now been reset and will be up and running for anyone visiting tomorrow.

Speaking to the Sun, a spokesperson for Alton Towers said: “We apologise to all guests affected by the stoppage on The Smiler late this afternoon.

“Our guest relations team have spoken to everyone on board to offer return tickets to the park as compensation for the inconvenience.

“Our technical team are working to reset the ride this evening so this should not affect guests visiting the park tomorrow.”

The £18million roller coaster launched back in 2013 and features a record-breaking 18 loops.

It was involved in a serious incident in June 2015, when a full carriage hit an empty carriage at 52mph resulting in life-changing injuries for a number of people.

Two women, Vicky Balch and Leah Washington, who were at the front both had legs amputated after the horror crash.

Speaking at the time Nick Varney, chief executive of Merlin Entertainments, said the company was determined to ‘never repeat’ the devastating crash.