The six-year-old boy who is believed to have been thrown from the 10th floor of the Tate Modern art gallery in London is now in a stable condition, police have said.

The child had fallen onto a fifth floor roof after dropping from the viewing platform yesterday afternoon (4 August).

He was airlifted to hospital, where his condition was initially described as critical.

However, the Met Police have now said that the child is ‘no longer in a life threatening situation,’ and that he is critical but stable.

The six-year-old boy injured at the Tate Modern is now in a critical but stable condition in hospital. A 17-year-old male remains in police custody. Enquiries are ongoing.
– Metropolitan Police (@metpoliceuk) August 5, 2019

They added that the 17-year-old boy arrested on suspicion of attempted murder remains in police custody.

“Enquiries are ongoing,” the statement said.

Police were called to the scene at around 2:40pm on Sunday afternoon to ‘reports of a young boy thrown from the tenth floor viewing platform of the Tate Modern in Bankside SE1,’ along with London Ambulance Service and London’s Air Ambulance.

“We treated a person at the scene and took them to hospital,” a London Ambulance Service (LAS) spokesman said.

The 17-year-old boy had remained with members of the public on the 10th floor viewing platform, before being arrested on suspicion of attempted murder and taken into police custody.

An eye-witness told the Mirror: “I heard the impact and then screaming from above as a woman screamed, ‘He’s my son! He’s my son!’

“I went inside because the screaming was horrific, the boy didn’t make any noise but the people from the viewing platform were screaming. 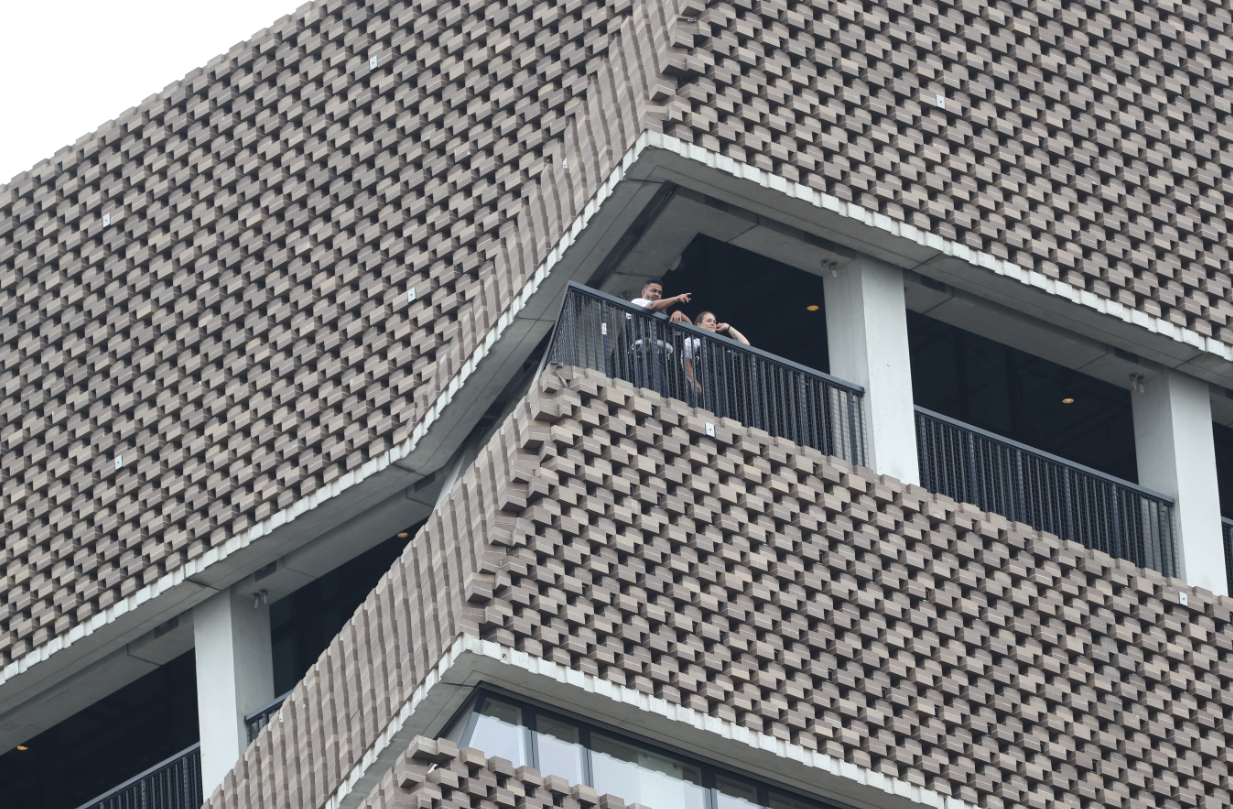 Police officers look out from the viewing platform at the Tate Modern art gallery. Credit: PA

“Inside, after around 10 minutes we were told to leave. They tried to shut down the Tate but one door was left unguarded so we left through that door.”

Another witness, who says she arrived a couple of minutes before the incident, told the Sun: “I heard that the child had fallen onto the observation deck.

“People were waiting outside, they said they’d heard someone screaming. They said he didn’t fall all the way down onto the grass.

“Someone said they heard yelling and then the helicopter landed.

“I was there when someone was carrying out the stretcher with a body. We didn’t know what condition he was in.

“They weren’t running, it took them a good 10 minutes to bring him across the cordon.

“I’m grateful I didn’t see what was going on, I can’t imagine what their family is going through.”