Anyone interested in Glastonbury Festival knows that it can be a tricky ol’ game when it comes to trying to bag yourself a ticket. You need to register in advance, send pictures of your mug (900 pixels wide x 1350 pixels tall) and you might even need to re-submit before actually being able to buy the damn thing.

So, how Jack Watney and Sarah Adey managed to sort out 50 tickets is quite honestly beyond me – especially considering that you can only pay for six at a time. But perseverance served them well and this wasn’t any normal Glasto – this would be their wedding venue. 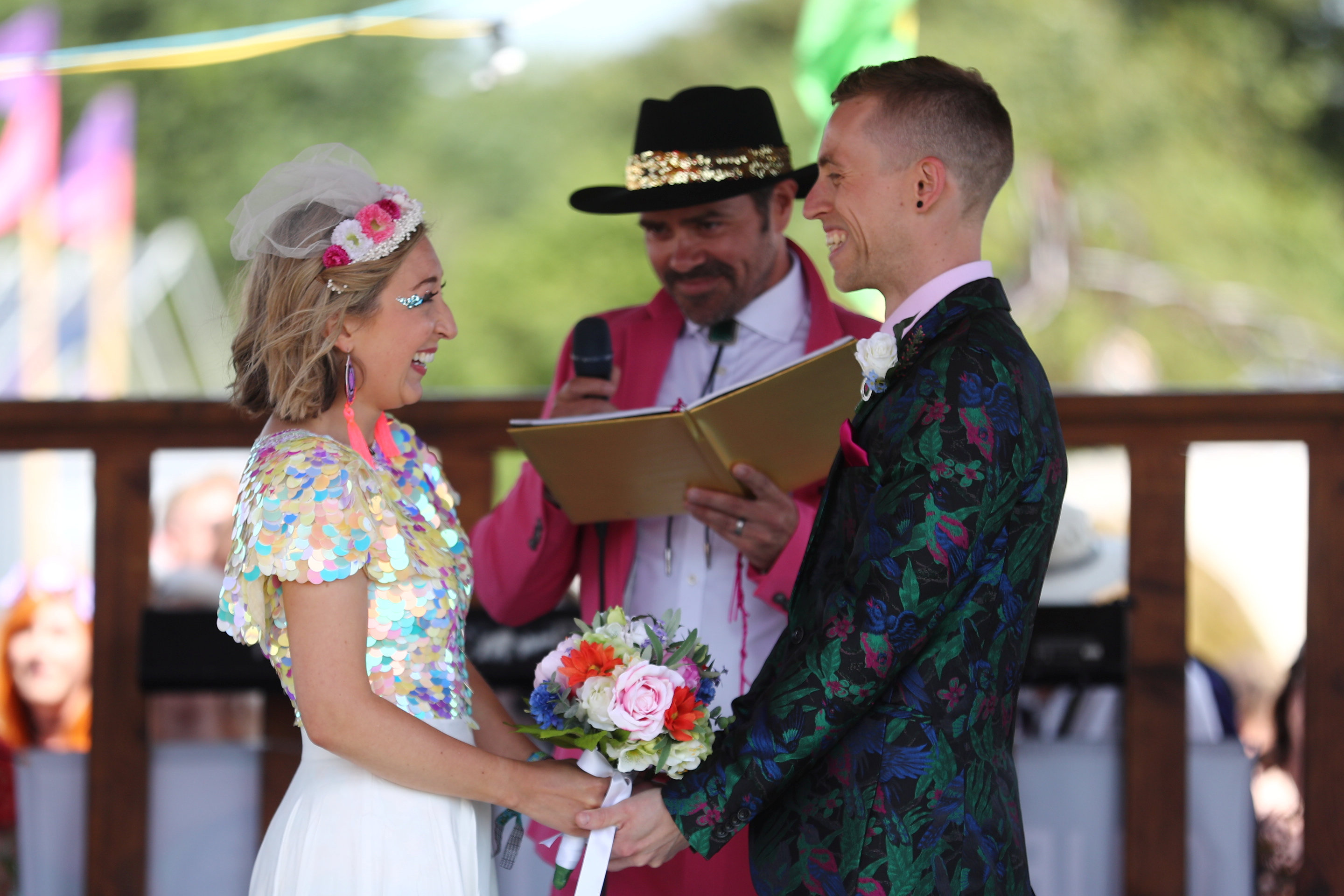 The happy couple on their wedding day at Glastonbury Festival. Credit: SWNS

The music festival, which is the biggest in Europe, holds a special place in the couple’s hearts, and Jack had no hesitation about popping the question there in 2017.

And when Sarah happily accepted, there was no doubt that the couple would also get married at Worthy Farm in Somerset – with their big day taking place today. 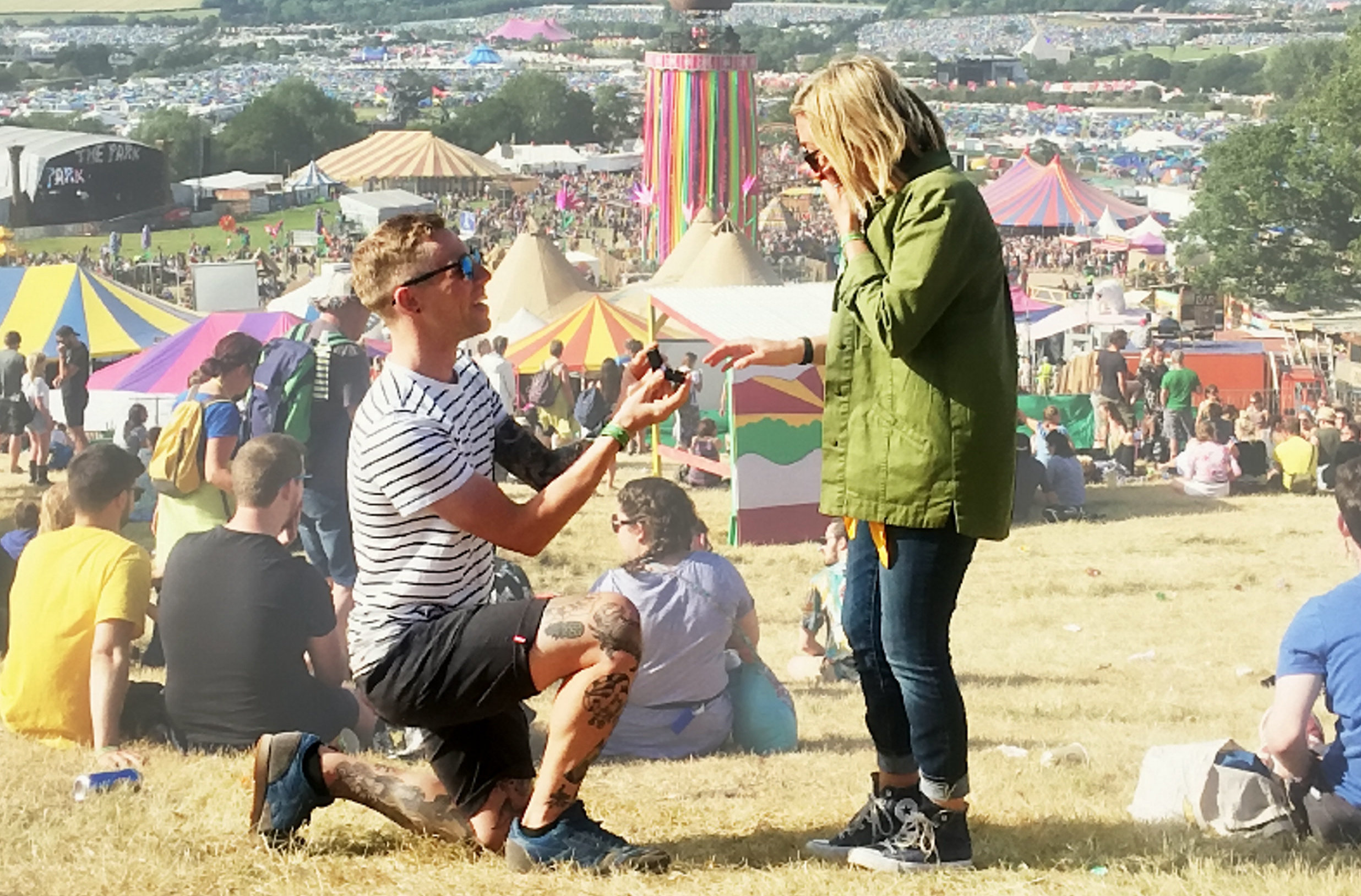 Jack proposed to Sarah in 2017… at Glasto. Credit: SWNS

They wed beside the Croissant Neuf bandstand, where they have seen many of their favourite bands, in stunning sunshine.

But the happy couple, who live in Glastonbury (keeping travel to a minimum), faced the tricky hurdle of making sure all 50 of their guests could get festival tickets to come and share their big day.

With two million people applying for just 135,000 tickets, the odds of Jack and Sarah getting tickets for all 50 wedding guests were stacked against them.

But after a tense six months, four ticket sales, and countless phone calls and emails, the couple were able to celebrate their big day surrounded by all their loved ones. 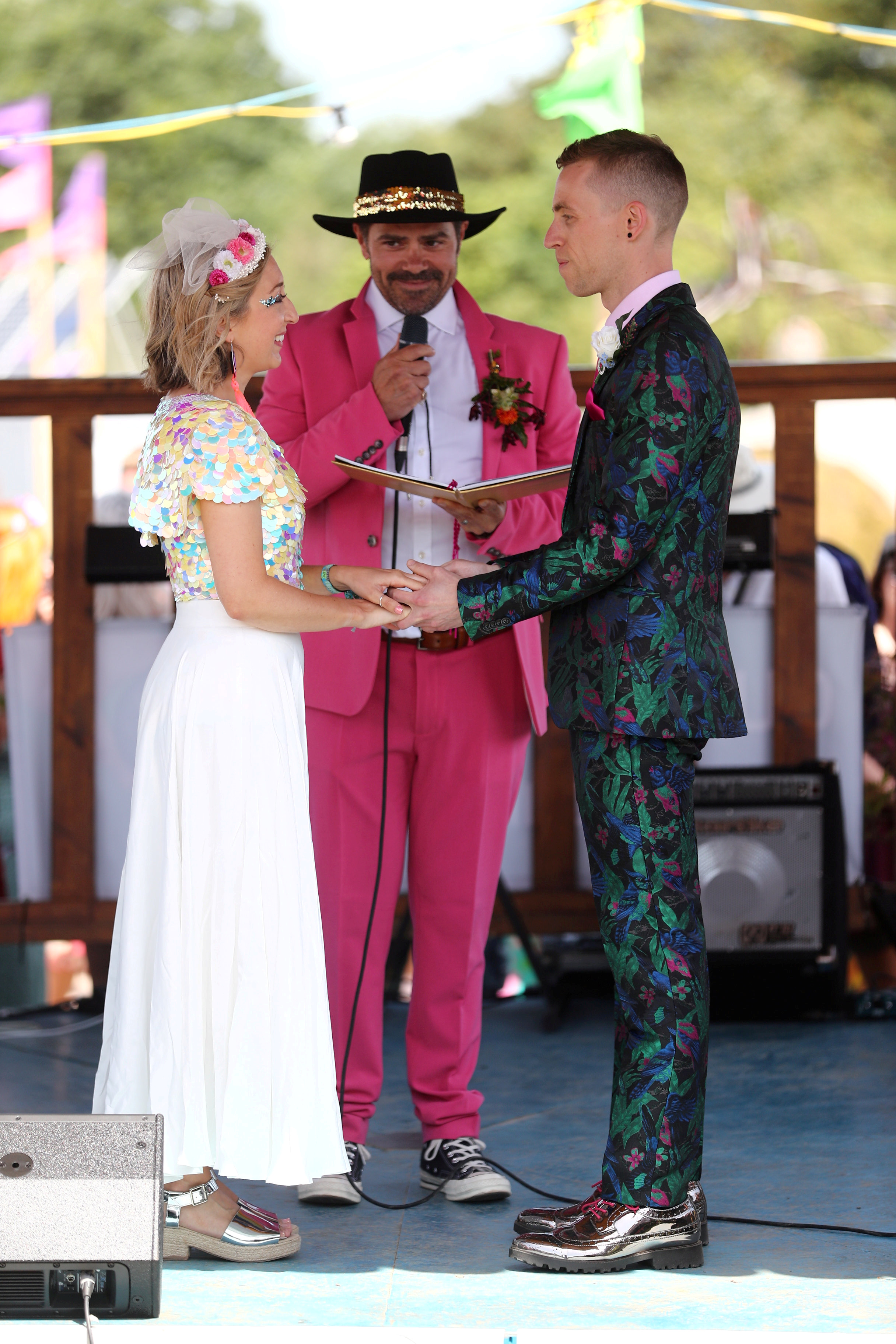 The pair wed in a colourful ceremony at Glasto. Credit: SWNS 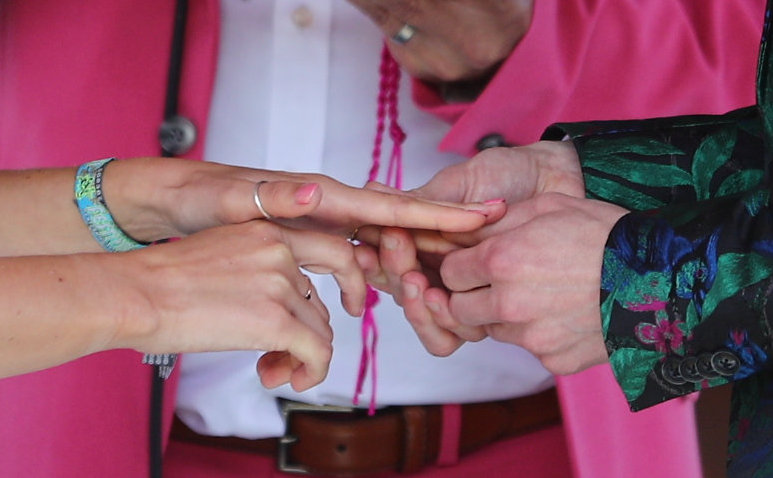 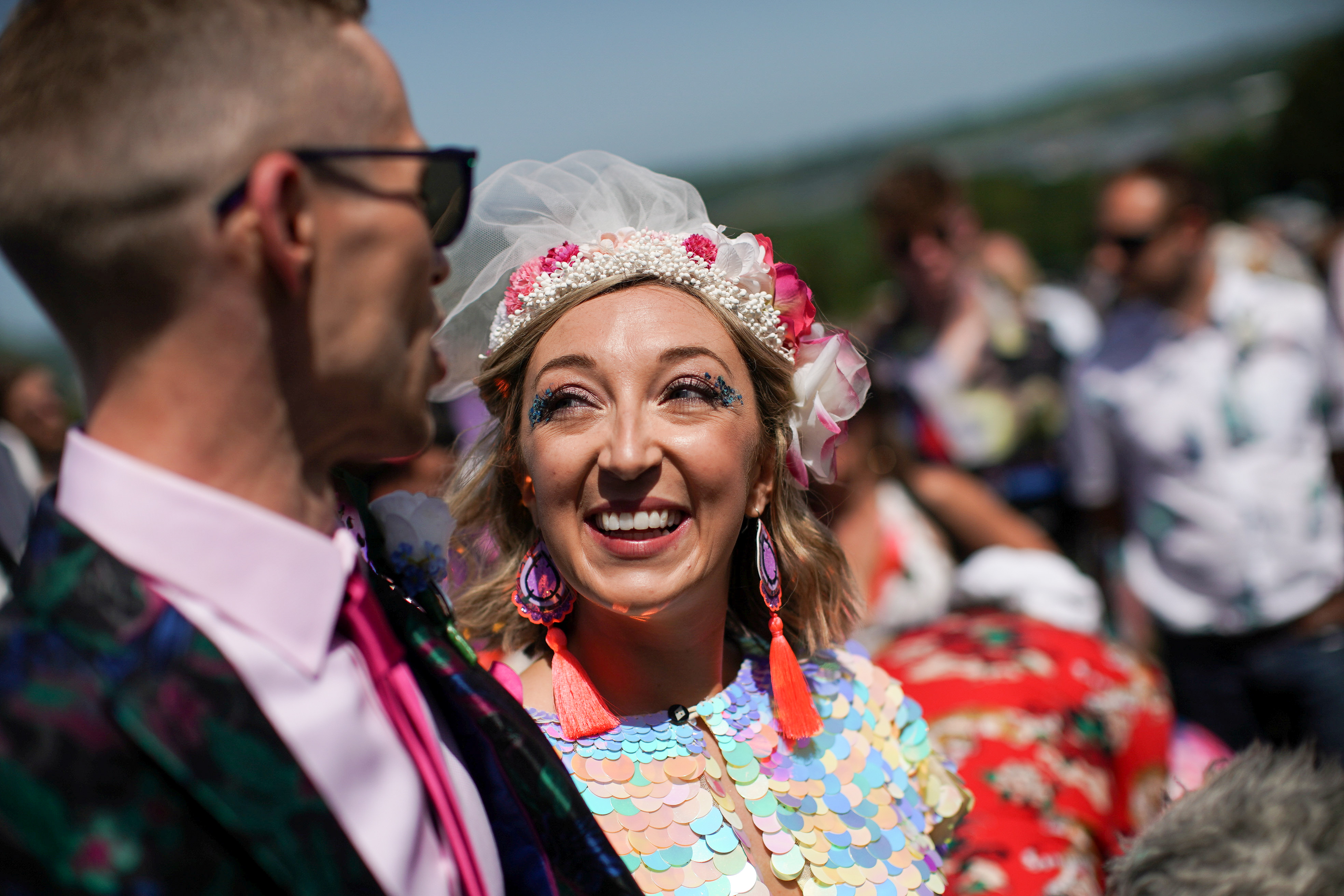 The managed to get tickets for their 50 guests. Credit: SWNS

Jack said: “That was the hardest part of the whole thing, to be honest. We managed to get quite a few tickets during the first sale in October, including all four of my best men – but none of Sarah’s bridesmaids got them that time around.

“We had to wait six months for the next ticket sale in April to see if her bridesmaids could get them then. That was awful. We were starting to plan things, but I knew Sarah couldn’t get properly excited yet.

“Somehow, we got them all. It was a huge relief. We were really lucky. But we had so many people helping us try to get them – including people who knew they couldn’t make it – that I feel like we had pretty good odds.” 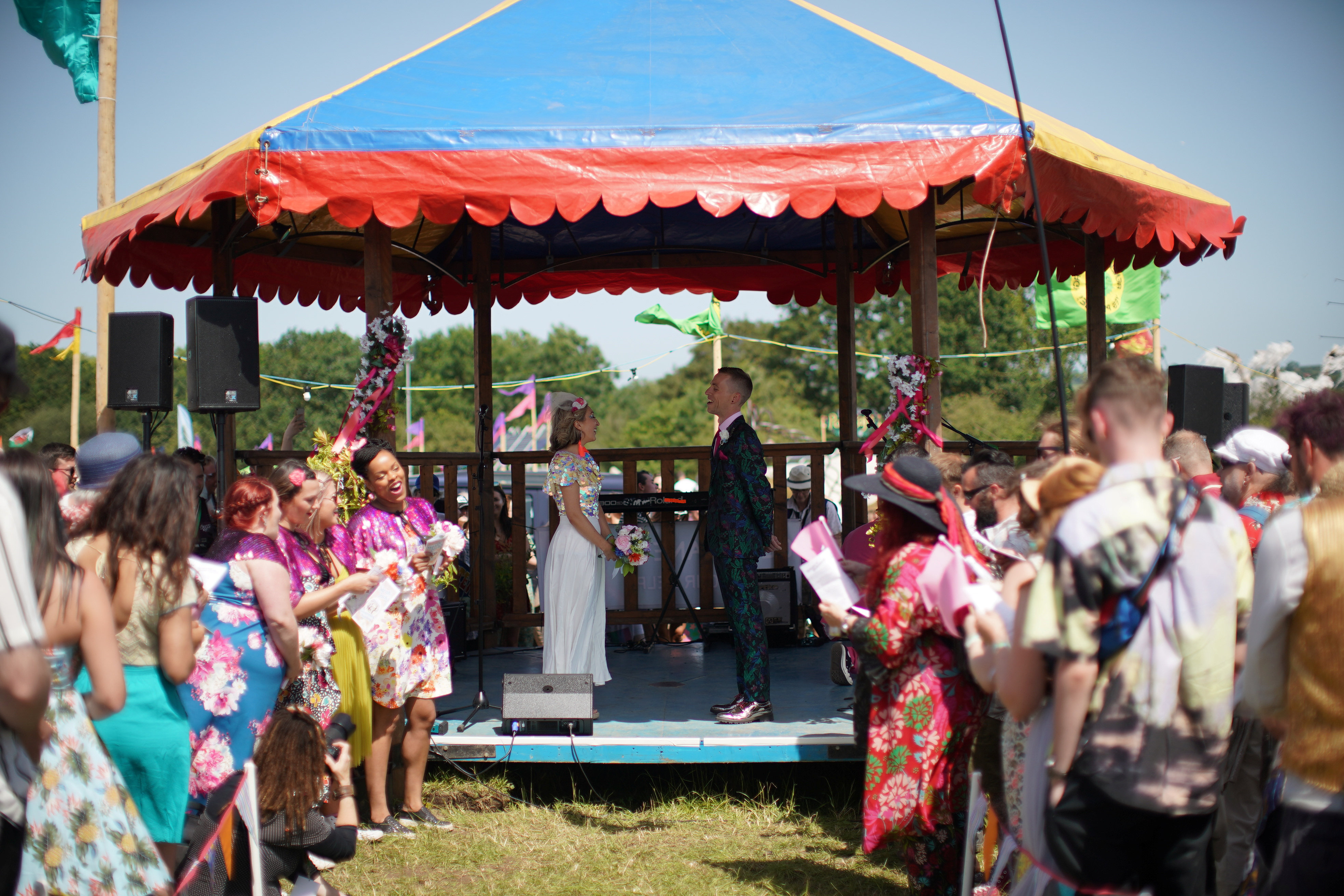 The couple remained positive and managed to bag themselves 50 tickets. Credit: SWNS

Jack and Sarah’s journey towards this big moment began ten years ago, when they met at university. In an early conversation, arts and marketing administrator Sarah said that she had never been to Glastonbury Festival.

Jack vowed to rectify that, having been to almost every edition of the festival since he was 17, and the couple went to their first Glastonbury together in 2011.

Teacher Jack said: “It was muddy, very muddy. There was knee-high mud. But despite that, she was so keen to go again and we have gone every time since.” 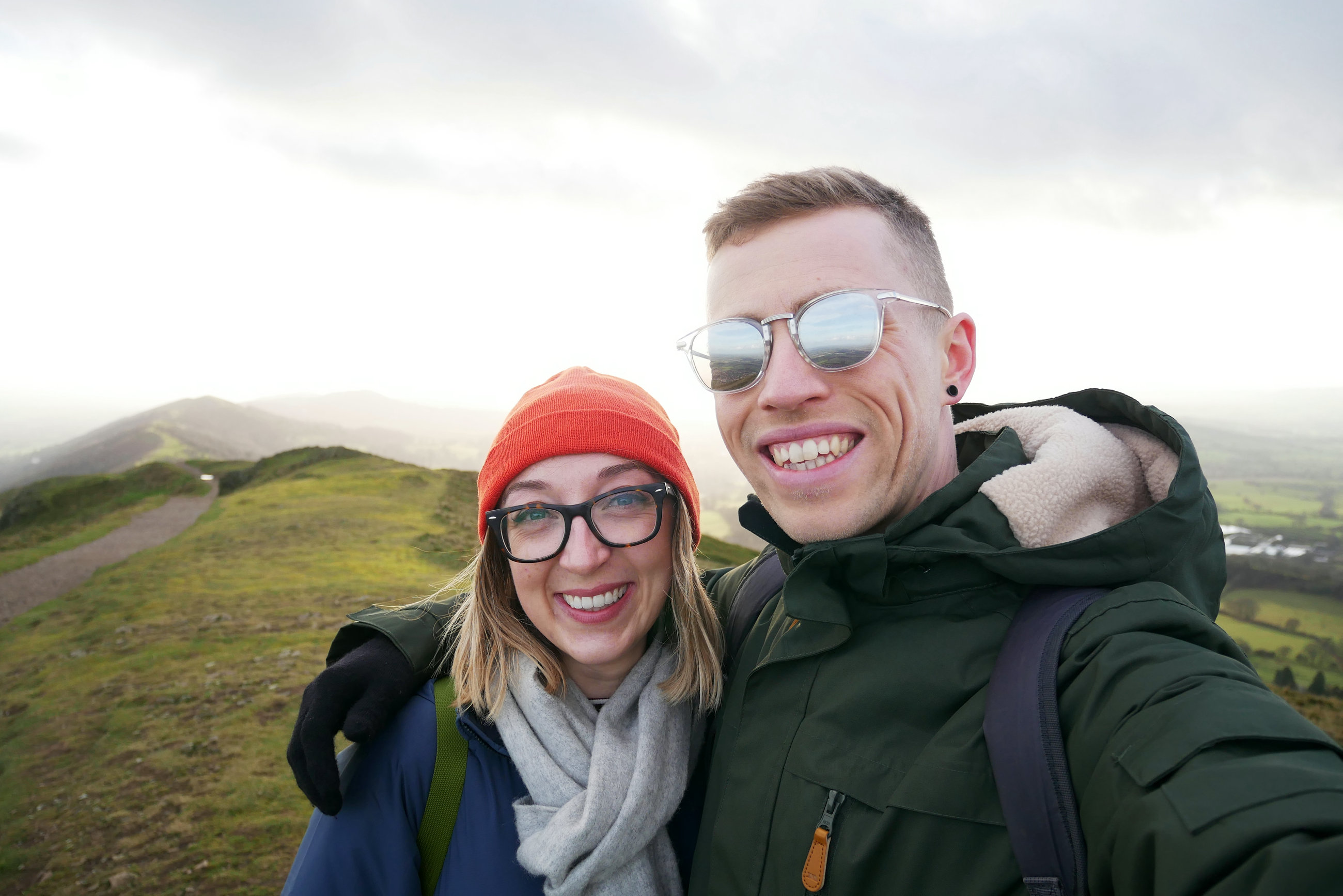 Jack has been going to Glastonbury Festival since he was 17. Credit: SWNS

A couple of years ago, the couple moved to Glastonbury from Brighton for a change of scenery – and Jack became resolved to propose to Sarah at the festival.

He chose the exact spot – nearby Pennard Hill, which he used to walk up every year, only looking at the view when he had reached the summit.

Jack said: “Doing this became a sort of ritual for me and my family, and I did that with Sarah when she came to the festival too. We would do it in the day and in the night. The view is pretty spectacular.

“We had seen another couple getting married at the festival around 2012, and I’ll never forget that. It was more like a performance – lots of people turned to watch, everybody applauded.

“Neither of us are particularly into big public displays of affection, we don’t really like the idea of having a day that’s just about us. So after I saw that wedding, I hatched a plan to propose to Sarah on that hill.” 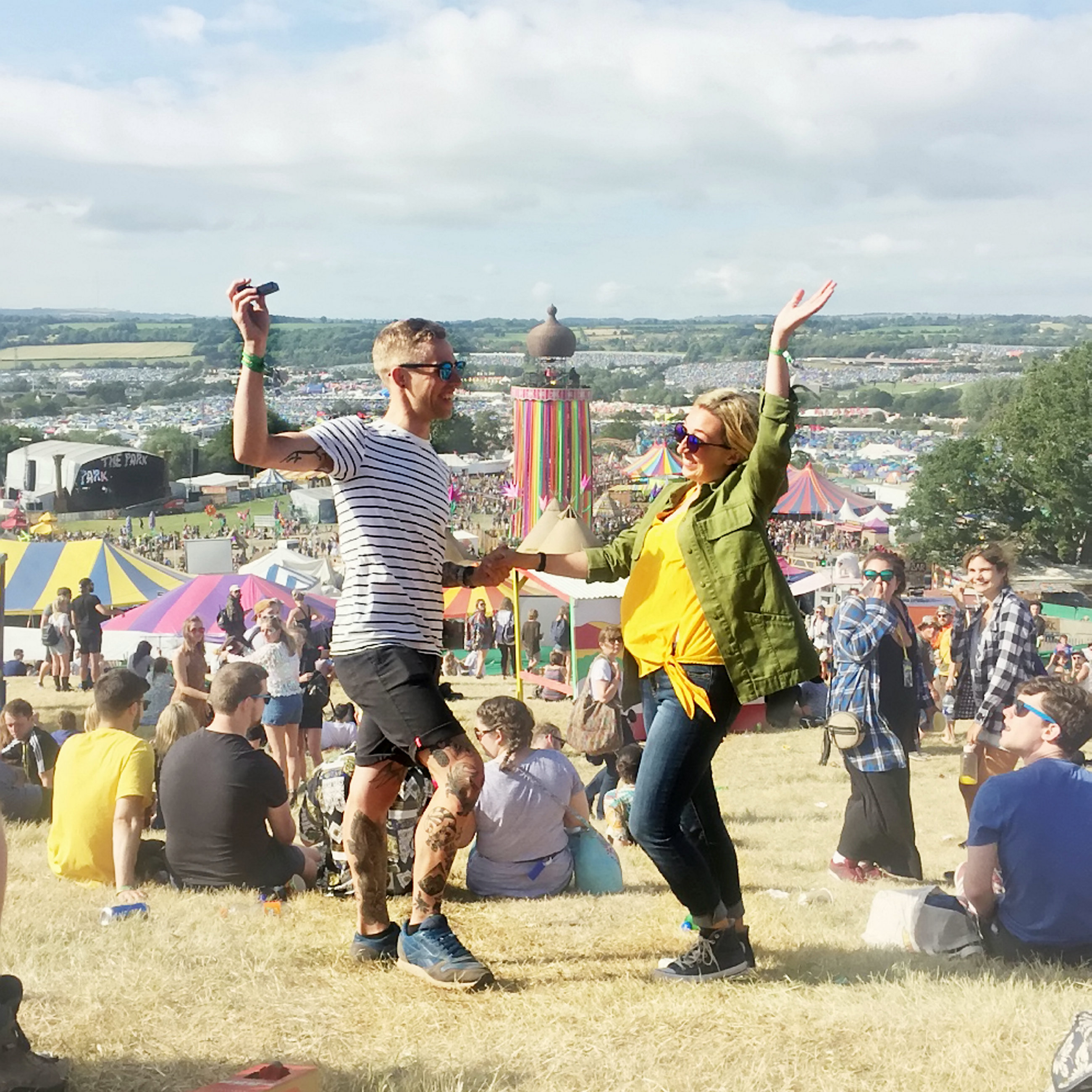 Jack proposed on Pennard Hill, where the couple would regularly walk to see the views. Credit: SWNS

Ever the romantic, he kept his big plan a secret from everyone. He said: “I didn’t tell anyone about it. My friends, Sarah and I walked up Pennard Hill and I asked my friends to take some photos of us at the top.

“After they took a few, and without anyone knowing, I proposed to Sarah. The photos came out great. Everyone was cheering and whooping. It was just incredible. The noise was deafening. People were coming up to us and saying congratulations and hugging us.”

But he admitted that he was a big bundle of nerves in the run-up to the big proposal – particularly when it came to taking the ring into the festival.

“2017 was the year that they increased security at the festival,” Jack said. “I was really worried that the security guards would make me take out the engagement ring and give the game away. I was very nervous in the queue to get in but thankfully it was all okay.” 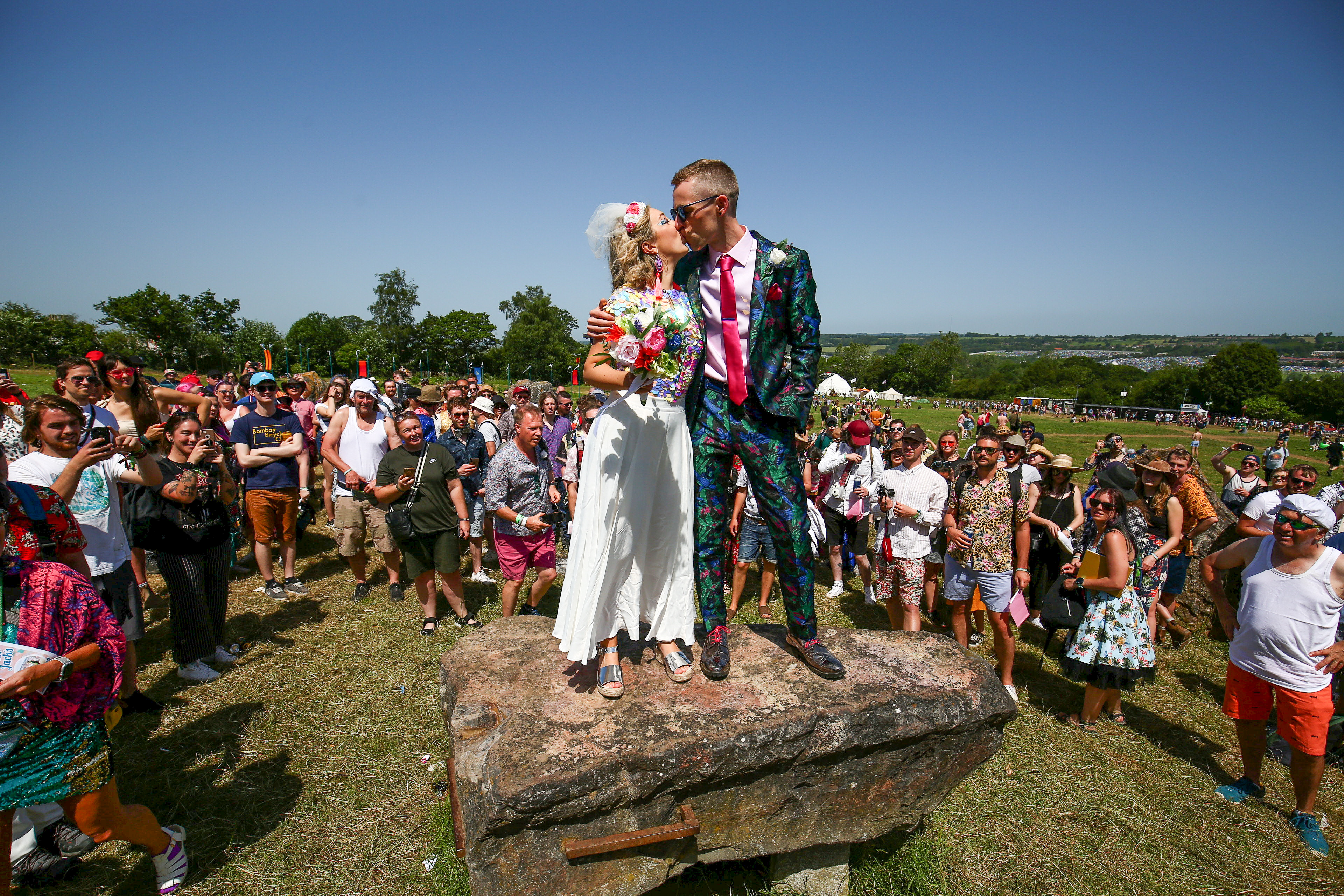 The couple later got in touch with the head honchos who run the Croissant Neuf bandstand, who were more than happy to allow for the wedding to go ahead there. They finished up the ceremony with a procession up to the famous Glastonbury sign.

Sarah said: “It is unbelievable really. I was completely shocked when he proposed. The fear of not getting tickets was crazy. It was such a big relief.

“We wanted to make it special for all our friends and family. There was a massive crowd too. It was an unforgettable experience.”

Now the wedding party can enjoy what will undoubtedly be an unforgettable weekend. Congrats, guys.