A large number of pilot whales have been found dead on a beach in Iceland.

The gruesome discovery was made by a helicopter pilot who was taking some American tourists on a sightseeing trip over the western side of the island.

While they were flying over, they spotted dozens of marine mammals – some already partially buried in sand – near to the beach at Longufjorur.

It’s not immediately clear how the whales ended up on the beach, but pilot whales are notorious for beaching themselves in large numbers. 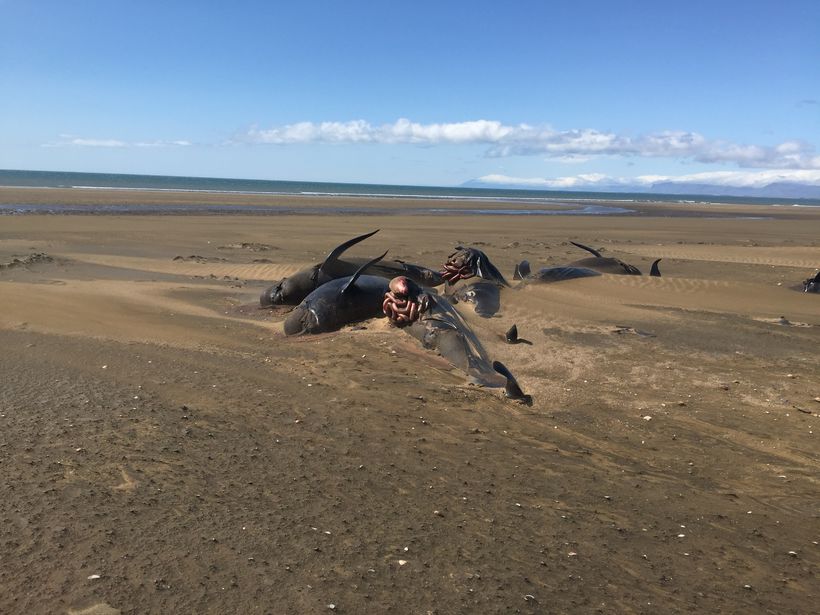 The whales were found washed up on the beach. Credit: AP/David Schwartzhans

It is likely that a pod of the whales became lost and then stranded themselves on mass in the shallow water.

Local media has reported that police in the nearest town of Stykkisholmur have been made aware of the discovery.

The area in which the whales were found is not easily accessible by land and has no nearby roads. That means that the whales may not have been discovered if David Schwartzhans and his passengers weren’t there to observe from the air.

The pilot told BBC News: “We were flying northbound over the beach and then we saw them. We were circling over it not sure if it was whales, seals or dolphins. We landed and counted about 60 but there must have been more because there were fins sticking out of the sand.

“It was tragic and when we stood downwind it was smelly. It wasn’t something nice to see and quite shocking since there were so many”.

Marine biologist and whale expert Edda Elísabet Magnúsdóttir said that pilot whales can become disorientated when in shallow waters and often swim in very close proximity to one another, increasing the risk of the whole lot becoming beached. 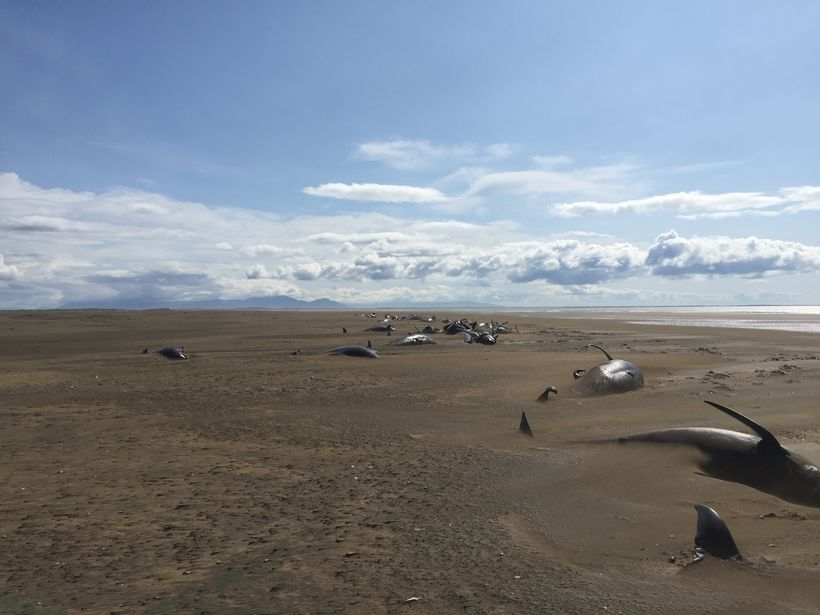 The whales could have swum ashore and died. Credit: AP/David Schwartzhans

She told Iceland Monitor: “The most important thing to look at is that these are deep-sea whales, common at the continental margin,

“They mainly feed on squid, which is why they’re good at diving deep. When they enter shallow waters, most of them have a tendency to become disoriented.

“They use echolocation for orientation, for finding one another, estimating the depth, and so on. But a sloping, sandy bottom appears to increase their disorientation. There are numerous examples of them having beached where there is such a sandy, sloping bottom.”

She went on to say that there are other possible contributing factors, including currents and strong winds that can increase the likelihood of a mass beaching if the whales are already in trouble.