Hailie Jade Scott is the daughter of hip-hop and 8-Mile superstar Eminem and his ex-wife Kimberly Anne Scott. You may recognise her from her father’s lyrics, but now she’s all grown up and is creating her own brand as an Instagram influencer. After joining the social media platform in October 2016 she’s gained over 1.6million followers so is a celebrity in her own right. She was born Hailie Jade Scott Mathers on Christmas day 1995 in Detroit, Michigan which makes her 23-years-old. Hailie shunned the limelight until she created her Instagram account in 2016 and ever since has been inundated with offers from major brands.

Hailie has been in a relationship with former fellow MSU student, Evan McClintock, for more than two years. A source close to Hailie said: “Marshall was just hitting the big time at the age Evan is now, making headlines for his shocking lyrics and toxic relationship with Kim.

lolla, i love you but i’m feeling hella thankful that i have a year to recuperate before i attempt to survive you again :v:

“Evan studied economics and is a keen golfer, there’s a huge difference.

“Hailie’s family have welcomed Evan, they are a fantastic young couple who love cosy nights in rather than hard partying.

“She enjoys keeping a low profile, walking her dog and going to fitness classes, hanging out with her friends and holidaying with Evan.”

Hailie is Eminem’s only biological daughter but has two half-sisters called Whitney Scott Mathers and Alaina Marie Mathers who are half-sister through her mother Kimberly Anne Scott. 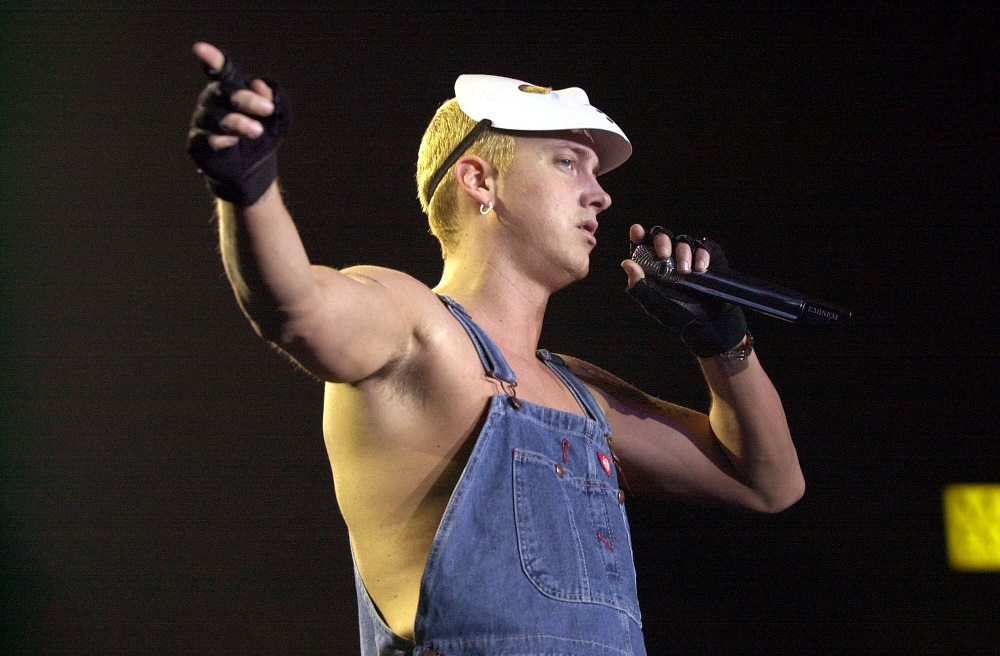 Eminem is probably most famous for his track ‘Slim Shady’. Credit: PA

Eminem speaks quite regularly about his daughter, rapping about her, but also doting on her in interviews. In 2002 he said: “She has been my main source of drive and motivation, especially when she was first born. I didn’t have a career yet, I didn’t have money, I didn’t have a place to live. I think that kicked me in the a*** harder knowing, ‘How am I going to raise her?’

“She’s always been the driving force for me to stay busy, stay focused, always been my number one reason for fear of failure. I can’t fail. I can’t have her grow up and not be able to say, ‘My dad succeeded’.

“I talk about her a lot, the truth is she is all I got in this world. If everything ended tomorrow, she’s all that I have.”

Throughout his successful career, Eminem has regularly made reference to his children, writing several songs about Hailie when she was young.

In 1999, Eminem controversially released track ’97 Bonnie and Clyde which then-toddler Hailie featured. The lyrics detailed the rapper killing Kim and described how he and Hailie would take a road trip to dispose of the body. He previously admitted that he sampled Hailie’s own voice on the track when he took her to the recording studio after pretending he was taking her out for lunch.

The rapper told NME at the time: “When [Kim] found out I used our daughter to write a song about killing her she f***ing blew.

Hailie also appeared on The Eminem Show album track My Dad’s Gone Crazy, which was inspired when she had uttered the song’s title while playing with her father. The song ends with the schoolgirl giggling: “You’re funny, daddy!”

Hailie is actually mentioned in at least 22 songs of Eminem, including Hailie’s Song, My Dad’s Gone Crazy, Kim, 97 Bonnie & Clyde, Beautiful and My Darling.

Haille even appeared in the official video for Mockingbird in 1999.

If you were interested in finding out everything there is to know about her father, check this article out.