Heart-stopping footage shows planes landing just feet away from excited tourists who hang around the landing area to watch the landings.

Skiathos Airport, in Greece, is located right next to a beach, meaning the landing strip is just yards from the sea.

But rather than avoid the low-flying planes, many adrenaline-loving tourists choose to wait there, with some even hopping on to a low wall to get even nearer. It’s a massive, massive nope from me.

A compilation of landings has been shared on YouTube with the caption: “Skiathos 2019 – lowest landing ever? The European St Maarten.

In one clip a British Airways flight comes in low, prompting a bunch of people gathered on the wall to fall off.

YouTube-user Cargospotter, who uploaded the video, wrote: “Skiathos Airport or as many of us aviation enthusiasts call it ‘the European St Maarten’ is one of the craziest airports in Europe.

“Airplanes land and depart right behind a small road and the airport of Skiathos became one of the main tourist attractions of the Greek island.

“Low landings and jetblasts can be observed on a daily basis and last week we filmed an incredibly low British Airways Embraer E190 landing. The people who were watching the planes were pushed from the wall by the wake turbulence of the Embraer.”

The poster says that when the weather is good as many as 100 people will gather to watch the planes land and depart. 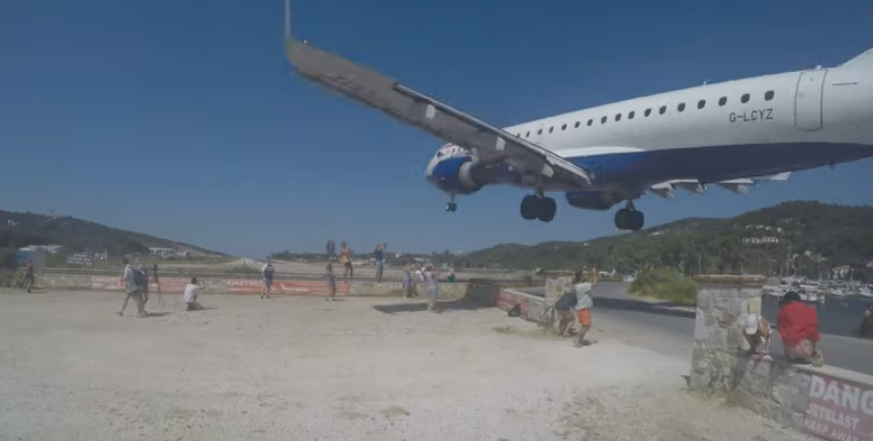 The area is very popular with plane-spotters, thanks to its short runway and close proximity to a public road.

Due to the size of the runway, the largest plane permitted to land at Skiathos Airport is a Boeing 757.

Earlier this year, shocking footage showing a plane landing on a motorway during rush hour, was shared online.

Roberto Alexander Castillo was driving home from work with his boss in British Columbia, Canada, when he saw the bizarre incident unfold.

He said: “My co-worker, who is also my boss, was driving and I saw the plane coming down on the highway. I told him, ‘Hey hey, look at that plane, man!’

“I was like, ‘Right in front of us, that plane is gonna crash!’ So, he pulled over and we were like, ‘What are we gonna do?’ Because we saw a big truck coming up behind the plane and we thought they were going to collide.

“But they landed well, really well. At that moment I thought maybe they were filming a movie or something.”

Local media reported that the plane had to perform an emergency landing after the fuel cap fell off mid-air emptying the fuel tank. Not ideal.

Thankfully the emergency landing went pretty well, with no collisions or crashes.