Home
Tech News
Killstreaks Are Back In ‘Call Of Duty: Modern Warfare’ – With Added Controversy

Killstreaks Are Back In ‘Call Of Duty: Modern Warfare’ – With Added Controversy

Activision has officially confirmed that killstreaks will be included in the multiplayer component(s) of the forthcoming Call of Duty: Modern Warfare, releasing on 25 October for PlayStation 4, Xbox One and PC.

Ahead of a full reveal of what’s coming up for this year’s multiplayer modes, on 1 August, the Call of Duty Twitter account posted four elements of the killstreak package. The last time that killstreaks featured in a CoD was 2017’s WWII, but only in a very reduced format. As in, there was one killstreak, with the game prefering to use the Scorestreak system instead.

While Scorestreak tracked a variety of achievements and actions, killstreak – as the name suggests – will reward one action only. Amongst the perks for hitting a run of kills are the unlocking of Juggernaut armour, and the option to take command of a tank.

Own the opposition – reap the rewards.

And then there’s being able to drop white phosphorus on your opponents.

Yes, this is just a game, and it’s a game where violence is a key, crucial element of enjoying the experience. And most of that is fine. Nothing new there – FPS games gonna FPS, and frankly, a lot of what we know, and have seen, of the new CoD: MW has us very excited. October 25 can’t come quickly enough.

But white phosphorus? My own Twitter seemed to realise something was up by blocking the content, as it was (it is) potentially sensitive. Yep. The use of said substance is definitely a sensitive subject. 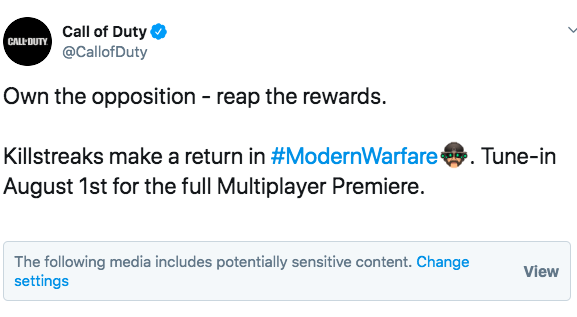 As other sites such as Eurogamer have pointed out, the use of white phosphorus against civilians, and when used as a chemical weapon, is actually banned (and has been since 1980, courtesy of that year’s Convention on Certain Conventional Weapons). Using it in areas with civilians is considered a war crime by the International Committee of the Red Cross. Its use specifically against opposing soldiers as an incendiary weapon is not banned, but highly controversial, and using it for area bombardment (like an airdrop) is prohibited. There is nothing fun whatsoever about its use and its after effects. Grisly doesn’t come close.

The US has attracted international criticism for allegedly using white phosphorus in Syria, hurting civilians in the process, as recently as March 2019. And its most notable previous use in a video game, in 2012’s Spec Ops: The Line, was not as a reward, but as a striking moment of outright horror. 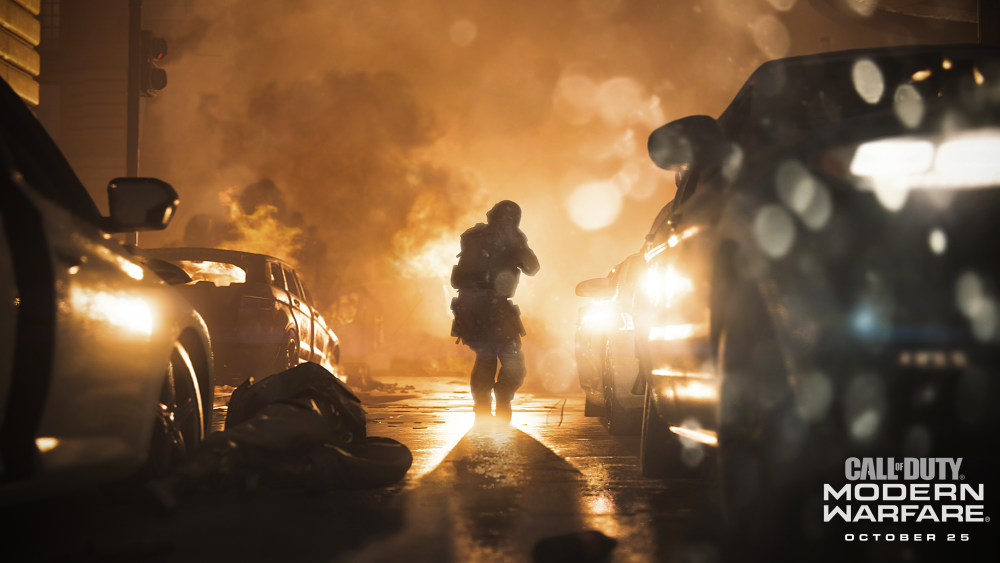 Call of Duty’s tweet describes the perk as being able to “cover the battlefield with white smoke flare canisters that will disorientate the enemy and burn any that wander too close”. I’m not going to go into the details of what the stuff will actually do to you, in real life, but there’s a reason it’s heavily regulated and banned in certain situations.

Does this represent a line being crossed by a video game – which uses a substance like white phosphorus purely for entertainment? You could argue that it does, given its debatable role in modern warfare. But then, bullets kill, too, likewise tanks, likewise airstrikes, and more.

In terms of the mechanics of a multiplayer combat game, such map-blanketing drops aren’t uncommon. For most players, this is just another tool to use to their advantage. And Call of Duty has actually used the stuff before, in the original Black Ops and Call of Duty Online, albeit in smaller grenades rather than indiscriminate airdrops. So: shrugs all round, I guess?

But developers Infinity Ward could easily replace it with something else, and get the same results with none of these question marks over whether it should be featured in an entertainment product. We’ll be monitoring the multiplayer reveal on 1 August to see if its use is better explained than what we’ve read in the tweet.