Kit Harington’s Reaction To Game Of Thrones Ending Was Brilliant

Heads up, folks, this article contains spoilers for the last episode of Game of Thrones, so if you’ve not seen it yet and don’t want to know the ending click away now. Don’t say I didn’t warn you.

A behind the scenes documentary caught the moment Kit Harington found out about his character murdering Daenerys Targaryen and it was pretty similar to mine, to be fair.

Harington found about Jon Snow killing his love interest/auntie during a read-through and as he gets to the scene, he can be seen putting his head into his hands before covering his mouth with his hand.

Meanwhile, Daenerys actor Emilia Clarke seemed know what was coming a bit ahead of her co-star and responds to his shocked face with her own funny reactions.

A narrator for the two-hour long documentary Game of Thrones: The Last Watch, can be heard saying: “For a moment neither moves as if moving would make this real. We see Jon with his hands still on the with the hilt of the dagger he’s just lodged in Dany’s heart.

“Her strength leaves her and she collapses to the marble. He keeps her in his arms and she falls, kneeling down to the floor beside her. He looks down at what he’s done, terrible and necessary.

“End of Game of Thrones.”

Harington wasn’t the only one to have a bit of an extreme reaction to the show’s finale, which has proved to be divisive at best. 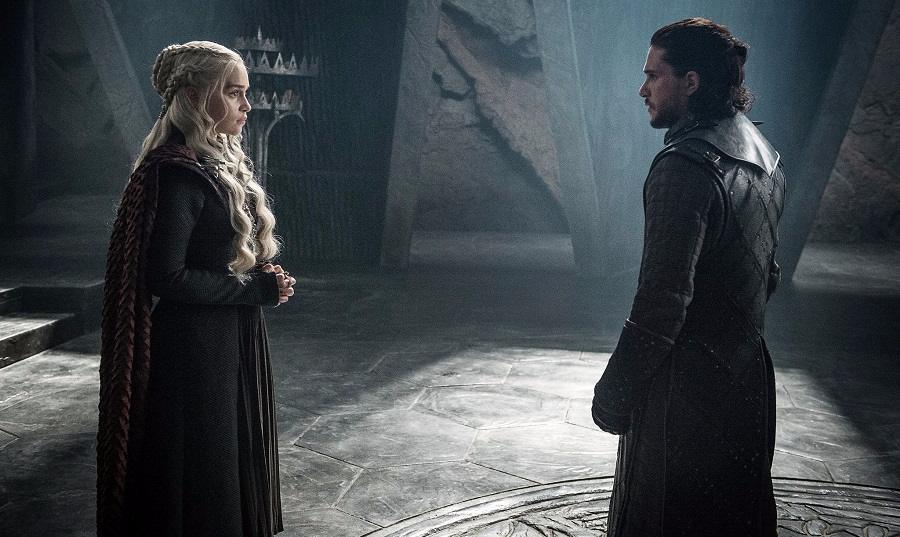 Jon ended up killing Dany to save the world. Credit: HBO

One pissed-off fan even went so far as to set up an online petition calling on HBO to remake the eighth season using ‘competent writers’, it’s racked up more than 1.5 million signatures.

Speaking in an interview with Esquire, Harington said: “How I feel about the show right now is quite defiant.

“I think no matter what anyone thinks about this season – and I don’t mean to sound mean about critics here – but whatever critic spends half an hour writing about this season and makes their [negative] judgement on it, in my head they can go fuck themselves.”

He added: “Now if people feel let down by it, I don’t give a fuck – because everyone tried their hardest.

“That’s how I feel. In the end, no one’s bigger fans of the show than we are, and we’re kind of doing it for ourselves. That’s all we could do, really. And I was just happy we got to the end.”