A man in the US has taken to the streets with a sign of his own after a beggar allegedly turned down his offer of work.

Ryan Bray, from Bradenton, Florida, said a beggar asked him for money while he was waiting at an intersection, but rather than hand over some cash, Mr Bray said he offered him $15 (£12.10) an hour to do yard work at the family’s remodelling business.

However, the beggar allegedly reacted angrily to the offer, kicking Mr Bray’s car as he drove away.

Speaking to FOX 13, Mr Bray said: “He reached his arms inside my vehicle, resting them and said, ‘Hey, do you have any money?’ I said, ‘No, but I have one better for you…’

“He said, ‘Absolutely not.’ Started getting belligerent and cursing.”

Shocked by the encounter, Mr Bray made his own sign and returned to the intersection, standing next to the beggar with it.

The sign read: “I offered him $15 an hour to do yard work for me and he refused. If we as a community stop paying them, they will leave our neighbourhood.”

As we were shooting our story the homeless man showed up. He wouldn’t give us his name, but he claims he’s not doing anything wrong @FOX13News #Manatee #Bradenton pic.twitter.com/MnAkTUXtBf
– Kim Kuizon FOX 13 (@kkuizon) July 15, 2019

Explaining why he decided to take the unusual step, Mr Bray said: “I can’t have my 13-year-old daughter and my wife driving with their windows up and being berated the entire time if they don’t get money.”

The beggar – who identified himself as Alabama – denied being offered a job by Mr Bray.

According to WBNS, he said: “He didn’t offer me nothing, buddy. I never had no trouble until this dude shows up. Just because he’s got money don’t mean as homeless people we don’t have rights.

“He’s a rich preppy ass piece of s*** who thinks I’m supposed to take his s*** because he’s got some money and he lives down here. I don’t care what you got, brother.” 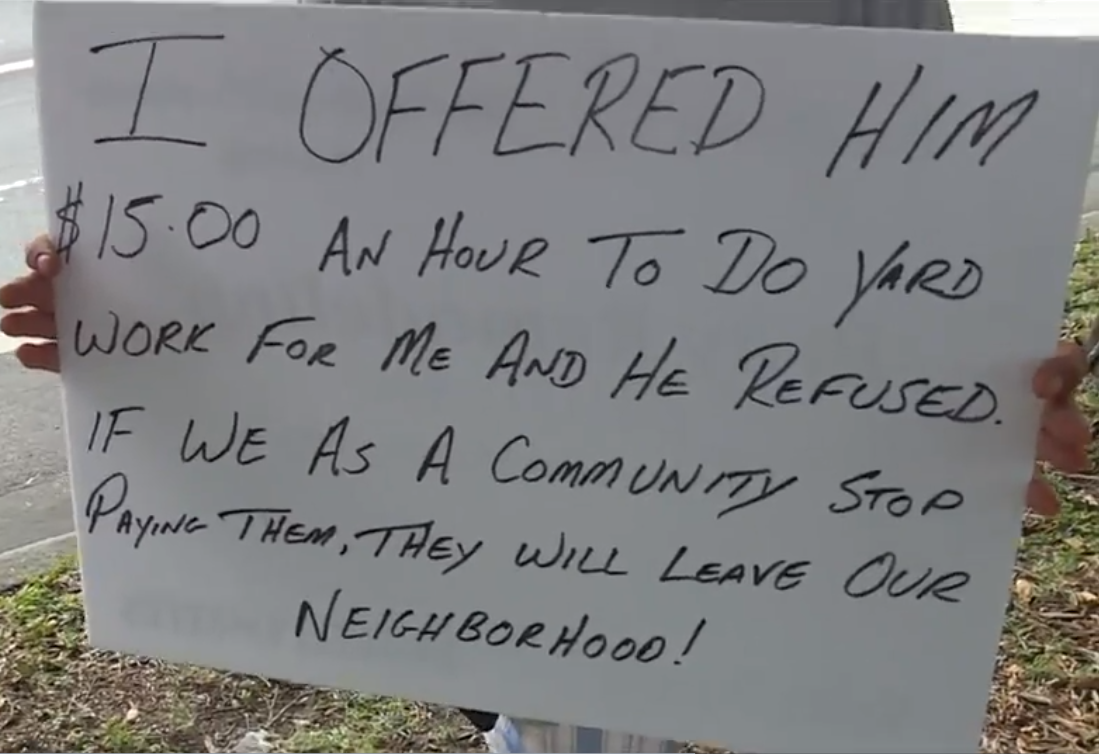 Mr Bray took matters into his own hands. Credit: FOX 13

She said: “It’s hard to tell the difference between someone who is really homeless and somebody who is out there just panhandling.

“The best thing to do if we all really want to get rid of panhandlers is to not give to panhandlers.”