Shedding the pounds is not always easy, but there are all sorts of methods you can try – most of which basically involve eating less and moving more.

But one bloke took extreme measures, agreeing to spar with an axe-wielding MMA fighter… a decision he unsurprisingly lived to regret.

Andrey Kynyazev was training with an MMA fighter from Chelyabinsk, Russia, called Maxim ‘Mad Max’ Novoselov, in a bid to lose weight.

Most of their training methods were relatively standard, but then they were given an axe as a present, and things went t*ts up.

The pair decided to spice up their training with a bit of swordplay, with Mad Max taking the axe and Andrey arming himself with a hammer and shield that appears to be made from hay.

It doesn’t really seem like an even match, and the shield looks far too flimsy to withstand an axe swing from Mad Max, who is built like a brick sh*thouse, but clearly Andrey isn’t really in a position to complain. 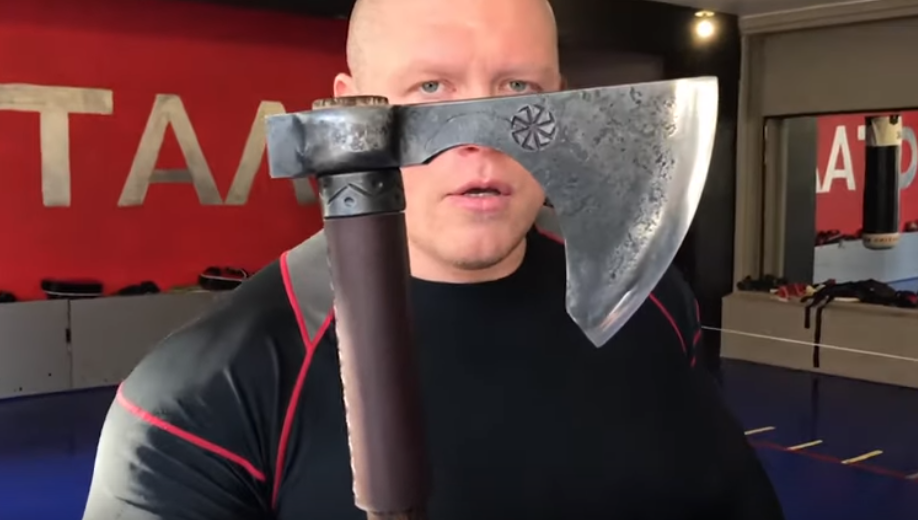 You do not want Mad Max to come at you with an axe. Credit: Caters

After tossing the axe between his hands, Mad Max lands a strike in Andrey’s shield. Andrey then comes at Mad Max with a swing of his hammer, but Mad Max then lands his second strike with a big grin on his face.

However, that smile quickly vanishes as Mad Max realises his partner is in pain, with the axe having severed his shield and punctured his arm. Andrey then leaves the gym, having lost the fight and quite a lot of blood.

Fortunately, while the battle clearly went quite badly wrong, Andrey has survived to tell the tale and has a scar to commemorate the time he stood toe-to-toe with an axe-wielding Mad Max.

He said: “That day me and Maxim wanted to shoot something special, but it went wrong.

“It took four weeks to recover. Of course, I got to hospital where I had two stitches.

“It still hasn’t recovered perfectly and I have a scar now.”

Andrey has been left with a scar from the axe wound. Credit: Caters

The moral of the story – never try to lose weight.

Or never try to lose weight by fighting a massive MMA fighter with an axe anyway.