Finally, the gaming world is getting what it has been crying out for – an open-world adventure about a gang of cats who have to work together to find out what has happened to all the humans on their island who have disappeared.

Peace Island allows users to step into a cat’s shoes – or paws – to solve puzzles to try and get to the bottom of the mystery of the missing humans.

The game is currently under development for PC, Mac and Oculus VR system. A VR cat experience? Shut up and take my money, Eric.

According to the fundraising page, Peace Island will be a ‘mix of science fiction, alternative history, and mystery – unfolds from the perspective of the nine cats who call the island home, when they wake up to find their human companions gone’.

As the owner of two cats, I can say with some confidence that my cats would be pretty happy to wake up to find their human companion gone – but the cats of Peace Island are different from my ungrateful pair and are dead-set on finding out what’s happened.

“Peace Island is an interactive story-driven experience which will focus on discovery and exploration, rather than combat,” the site continues.

The open-world game kicks off nicely enough, allowing gamers to lounge about the sunshine and explore their new territory, but not all of the island’s inhabitants are friendly, so you’ll need to keep your wits about you.

As you go through the game solving puzzles, picking up clues and completing side-quests, you’ll ultimately be faced with the question: ‘Are the humans worth bringing back?’ Now that sounds more cat-like. 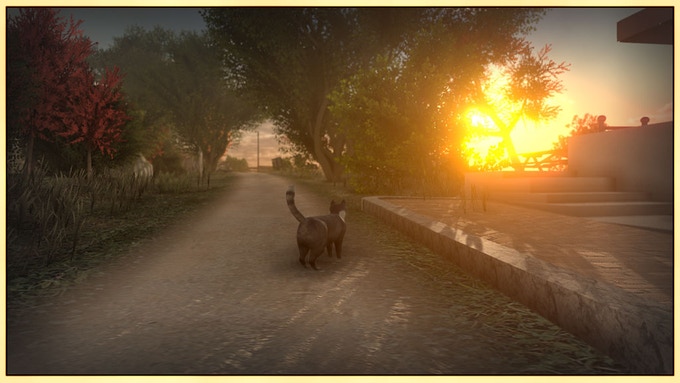 Solve puzzles, play side quests or just lie around in the sun. Credit: Eric Blumrich/Peace Island

Before you get too excited, it looks as though it still might be a while before the game is released, with Blumrich recently updating the KickStarter to say the Beta will be delayed by three months but he has promised that ‘a great game is coming’. Well, I don’t doubt that, to be fair.

To find out more about Peace Island or to join the KickStarter, you can click here.