Police have turned the tables on a fugitive who used social media to mock them, after they managed to capture the man and get a selfie with him for Twitter. Isn’t 2019 weird?

The whole thing kicked off when Andrew Fox, 32, shared a photo on his Facebook page showing him sticking up his middle finger to a police car with the caption ‘Hello Mr Officer’ after a warrant was issued for his arrest. 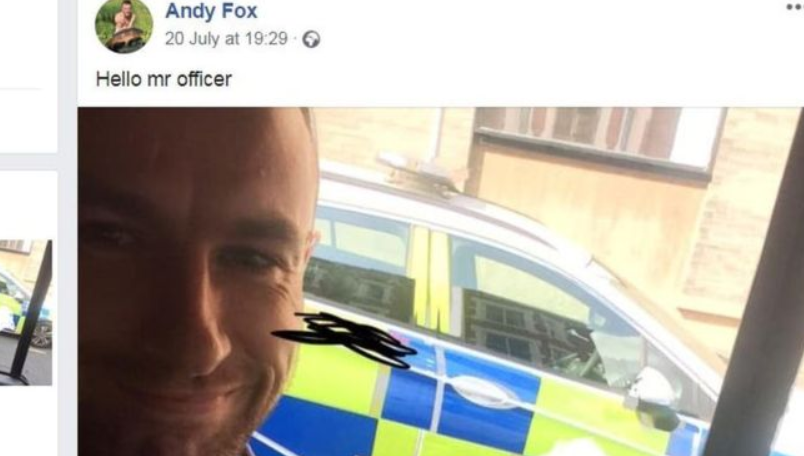 Andrew Fox was wanted by police after breaching the conditions of his licence. Credit: Facebook

He also made a number of other mocking post, according to the BBC. Fox was wanted by police after breaching the conditions of his licence following an assault conviction.

Speaking at the time a spokesperson from Northamptonshire Police said: “Rather than spending his time posting on social media, we’d advise him to hand himself in.

“Otherwise our officers look forward to catching up with him, after which he’ll have plenty of time behind bars to reassess his situation and the choices he has made.”

However, since then the official Northamptonshire Police Twitter account has shared a snap of Fox alongside two cops, who have their faces covered by smiley face emojis.

While Kettering ProActive Cops, shared the same photo with the caption: “So the ‘fugitive’ who has been mocking our colleagues will mock no more.

“You’re in ‘cuffs lad, and off to custody having met us today. Not much to smile about, one would suggest.”

Since sharing the post, members of the public have praised the police for catching Fox.

The force confirmed in a statement that Fox will now be returned to custody to finish his sentence.

A Northamptonshire Police spokesperson said: “After a bit of cat and mouse on social media, we’re pleased to have caught up with Mr Fox, just as we promised to do.

“Thank you to the members of the public who shared information with us to help track him down.”