Home
News
Raccoon Gets Itself Well And Truly Stuck In Drain

Raccoon Gets Itself Well And Truly Stuck In Drain

A curious raccoon got into a spot of bother after it tried to clamber through a drain and got well and truly stuck. Like, properly wedged.

While it’s not really clear how it got there, I can’t help but imagine the critter out on the prowl for food, peering down the drain with an apprehensive but determined look on its face before taking the plunge – and instantly regretting it.

The young animal was spotted on Thursday morning in Massachusetts when a passer-by clocked its helpless glare staring up at them from the ground.

Newton Fire Department then rocked up to help the raccoon, who had apparently been ‘stuck for a while’.

They tried using the tried-and-tested soap and water combo, but this didn’t work – in fact, it just made the poor animal more distressed.

They also tried to tie fishing wire around its neck to try and decompress it enough to slide through the drain cover, but this was also to no avail.

Eventually, they called for backup from Animal Control, and after an officer and a vet arrived they all decided to sedate the raccoon so it would relax enough to be pried from the grate. 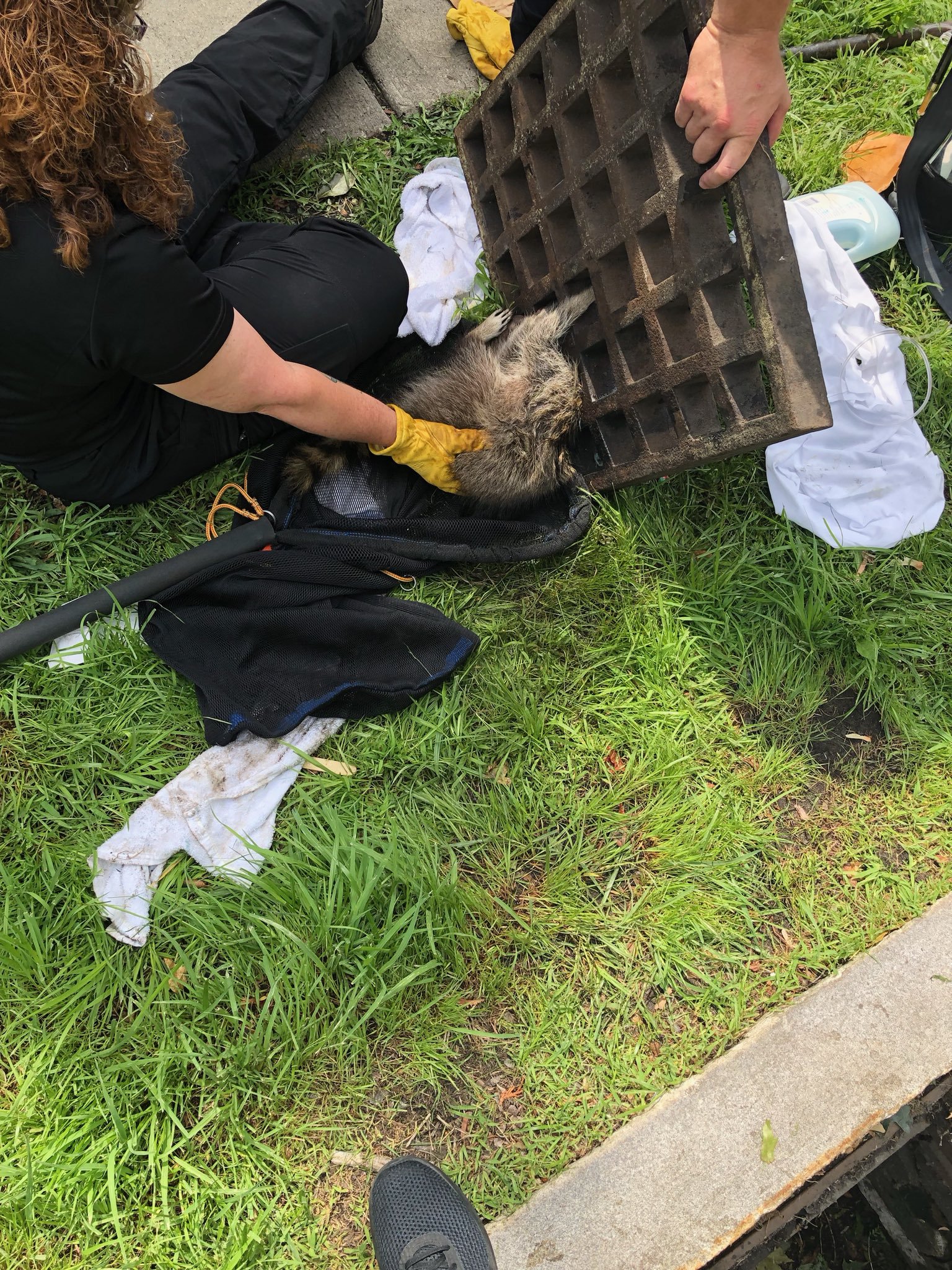 Captain Eric Fricke from Newton, Massachusetts, told the Washington Post: “The raccoon ended up needing to be sedated so that it could relax enough.

“It was fighting the whole process.”

He added: “Everybody’s just happy that there was a positive outcome and they were able to get him out.

“Hopefully, he will recover and be off to live his life.”

Sharing photos of the raccoon’s misadventures, Newton Fire Department said in a series of tweets: “Distressed raccoon who got her head stuck in a sewer grate rescued after ‘two hour long saga’ including eight people, lots of soap and an ambulance crew has now been released.

“He had been stuck for a while but we are happy to report he is free… We rescue citizens both big and small!!!

“Always willing to help our 4 legged friends. It was quite the operation.”

We were able to rescue a juvenile raccoon today with help from Waltham’s Animal Control. He had been stuck for a while but we are happy to report he is free!!! #newtonfire #nfd #newtonma pic.twitter.com/q7CYEQCCWZ
– Newton Fire (@NewtonFireDept) August 1, 2019

In a later update on Facebook, Waltham Animal Control revealed that the raccoon had been released back into the wild, posting a video of the big moment.

The caption said: “Assisted Newton Fire and Police with a raccoon stuck in a storm drain grate. Happy to report I was able to release the juvenile raccoon today back near where she was found. It takes a village!! Thanks to everyone who helped… Newton Fire and PD, Cataldo ambulance and Mass animal medical center.“

It really does take a village. Great hustle, guys!