However, even with this expectation, scientists were left stunned when they bumped into a 16ft-long bluntnose sixgill shark in the deep waters off the coast of Eleuthera in the Bahamas.

The team – led by Florida State University – were actually down there in a submersible with the express purpose of encountering and tagging a bluntnose sixgill shark, but even, they had their breath taken by the beast that visited them.

Gavin Naylor, director of the Florida Program for Shark Research at the Florida Museum of Natural History, said it was ‘probably the most magical experience I’ve ever had’.

He said: “We were in pitch darkness in this globe. I was completely transfixed by being underwater in this other world. The hair on the back of my arms was standing up.

“It was like seeing a T-Rex in the water.”

Now, obviously with an experience like this you probably had to be there, but judging by the video, it doesn’t seem that much like seeing a T-Rex in water. They had legs and arms and a long tail. And definitely would have struggled at 1,700 feet below sea level.

But hey, Gavin saw it with his own eyes, plus there was some logic to his dinosaur comparison.

He explained: “This lineage has been around for 100 times as long as Homo Erectus (the ancient ancestor of humans), and these sharks haven’t changed that much.” 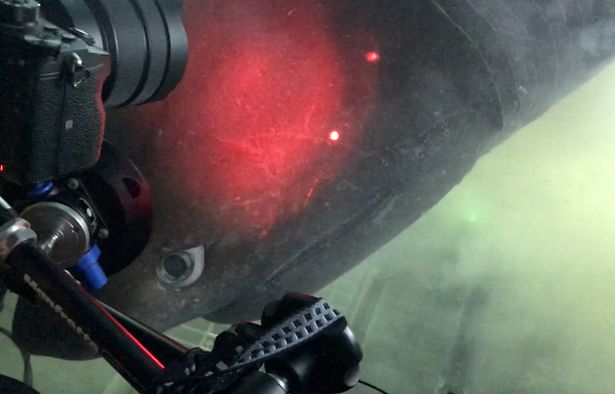 Gavin said the encounter was the most magical experience of his life. Credit: Gavin Naylor/Florida Museum

As well as affording Gav the most magical experience of his life, the mission was also successful in tagging one of the mysterious sharks.

It took a total of three expeditions, more than 2,000 pounds of bait, custom-built spear guns and more than a dozen tries to land the all-important shot, which was actually fired by Gavin himself, who described it as ‘dumb luck’.

The tag will be used to record data about the shark’s depth and the ambient light and temperature every three minutes for three months, which will offer researchers an insight into the habits and movement patterns of the poorly documented species.

But if you’re thinking, ‘Yeah whatever, it’s all well and good developing the submersible and all the additional mind-boggling technology it takes to tag a shark at 1,700 feet below sea level, but how are they planning on getting the tag back?’ Don’t worry, they’ve got that covered too.

At the end of the three months, the tag will automatically dislodge and float to the surface, transmitting the stored data to a satellite link.

Wow, (some) humans are clever.