A group of giant great white sharks has been seen hunting in the waters off the east coast of the US.

Researcher group OCEARCH has shown the predators are being tracked near North and South Carolina. The scientists have been catching them and attaching trackers to the animals to monitor their behaviour.

The biggest one they have ever tracked is called Luna – she weighs over 150 stone and is 15 feet long.

Her tracker sent out an alert on Monday near the Charleston Bump – an underwater rock formation 90 miles southeast of Charleston, South Carolina.

She is the largest great white ever caught and tagged by OCEARCH since the non-profit organisation was founded in 2007.

Speaking to CBS News, Dr Robert Hueter said: “In our studies, we have tagged about 43 sharks. And six of the largest ones are off the Carolinas.”

Other sharks have been seen, including Caroline, a 12ft female shark, a 10ft great white called Jane and a male named Brunswick. 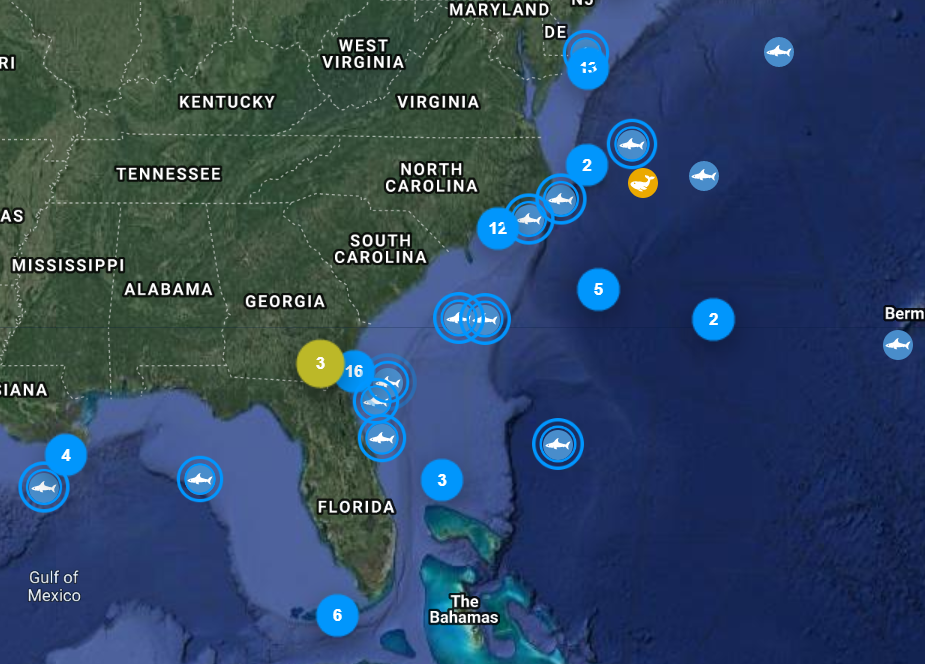 The group of huge white sharks are hunting waters around the east coast. Credit: Ocearch

Another named Katherine has been seen near Georgetown, South Carolina – and she’s a bit of a beast, weighing 164 stone.

“They’re not right up close to the beach, so no worries for the swimmers,” he said.

When they tag the sharks, they get information on their location, depth and temperature, with the trackers using satellites and sensors on the bottom of the ocean to get acoustic signals. Clever stuff.

They also take blood and tissue samples when they catch and track them.

The non profit organisation was founded back in 2007 and not only do they track sharks – they keep an eye on turtles, alligators and whales. The trackers let off pings which pull through to their website – and it is amazing to see.

You can see where each animal has been since they were tagged. Credit: Ocearch

The site allows you to see where in the world different tracked animals are, providing information about each of them including size, where they were found and everywhere they’ve been since they’ve been tracked, all marked out on a map.

Put a bit of time aside for this one, it really is fascinating.