Now that we’ve had time to get over everything that happened in the Game of Thrones finale and said goodbye to the series we love, we’re able to knuckle down and enjoy the fun bit that is digesting all the tiny details we may have missed.

That includes Sansa Stark‘s INCREDIBLE coronation dress, which fans have been busy dissecting.

As many of us had probably suspected, it turns out the many intricate features of her outfit were no mere coincidence – as confirmed by Game of Thrones costume designer Michele Clapton, who has used details like ’embroidery and colour‘ to help tell Sansa’s story throughout the eight seasons. 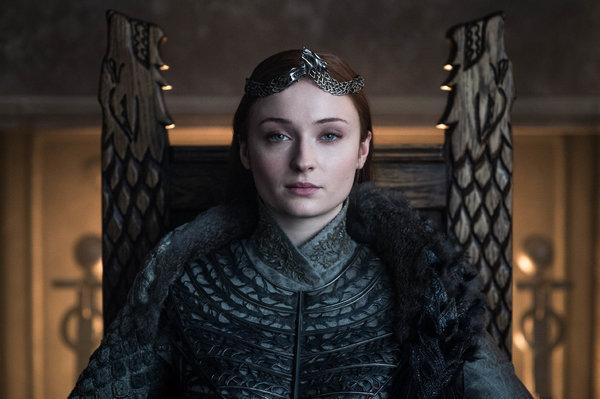 “I think you can see that she is influenced throughout her journey until she finally comes into her own style in season seven,” Clapton told Glamour ahead of the season eight premiere.

“The look is a culmination of her difficult story. The ‘Little Bird’ initially copied the style of Cersei [Lannister], when she first arrives in Kings Landing. She then retreats to the cut of her mother’s costume, a refuge, showing how she feels, wounded and scared, but she can’t speak it…. She tells of her pain through embroidery and colour.”

With this in mind, it seems apt that Sansa’s coronation outfit is symbolic not only of her strength and power, but also her roots.

Many people have also spotted the leaves on the dress, which look exactly like those of the Weirwood tree in the Winterfell Godswood – a special place for the Stark clan.

Nerdist writer Lindsey Romain explained: “There’s a layered meaning to this reference. First, the Godswood is where Ned would spend a lot of his time in thought, so it’s likely a nod to her father.

“But the Godswood is also where Theon died and where Arya killed the Night King, so it’s a place that holds a lot of meaning for Sansa.”

Sansa’s breast plate also bears the pattern of tree branches, which looks like yet another nod to the Stark’s Weirwood tree, while some fans have noticed that the fabric used for the body of the dress is the same as the material used for Margaery Tyrell’s wedding dress from the Purple Wedding.

This is the last thing Sansa saw Margaery wear before fleeing North. To make this the fabric pattern her choice is such a deep sign of respect for what Margaery managed to accomplish in her short reign as Queen. #GameOfThrones
– m 0 n k z (@m0nkz90) May 20, 2019

Sansa’s sleeves, meanwhile, are covered in fish scales – presumably a reference to the House of Tully, which was the house of her mum, Catelyn, who was killed a few seasons back during the Red Wedding.

Then, of course, there are all the direwolf references.

the wolf details on her dress, her crown and her throne,,,i’m gonna cry i’m so proud of you sansa pic.twitter.com/y6Qr2NHmh3
– ‏ً (@lclisamanobans) May 20, 2019

Along with the direwolves on her crown, there’s also one on her throne – a throwback to the six direwolf puppies her brother Robb found when they were younger.

THAT, friends, is how you do a costume. Bravo, Clapton!

Did you spot any other details? Come and tell us at Game of Thrones: Westeros Posting on Facebook.