Twitter is testing a few new desktop layouts and everyone is losing their minds. As people logged into their favourite social media platform this morning some were greeted with a simpler, airier redesign. This has sent shockwaves around the social media community with hundred of users taking to the platform to vent their opinion.

There seems to be a variety of layouts, with some users having a different experience than others. One layout features two columns rather than three, with a larger timeline on the left and the trending topics and who to follow features moved from the left to the right column. Others are getting a layout with a third, static column that holds the usual tools such as notifications and messages.

Look out for this banner on Twitter to see if you are eligible for the trial. 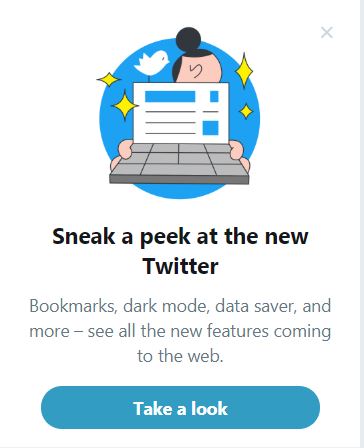 Twitter had announced the plan in January. They tweeted: “A new twitter.com is coming. Some of you got an opt-in to try it now. Check out the emoji button, quick keyboard shortcuts, upgraded trends, advanced search, and more. Let us know your thoughts!”

Just over four months later they followed it up with a second tweet: “Starting to see the new twitter.com? We opened it to more people, and now we’re testing two different designs. Let us know what you think, we’d love to hear from you.”

Whoever wrote that tweet might be regretting their decision as keyboard warriors pounced on the opportunity to bash the microblogging service. Twitter user Rikku had a problem with the trend and follow sections following you no matter how far you scroll down.

Maybe I just get too used to things but I kinda hate this new twitter layout. It feels cluttered and claustrophobic with the huge menu stuff to the left and the equally as huge trend/follow stuff to the right. And it follows you no matter how far down you go…

Ilonka isn’t grateful for the opportunity to see the change before everyone else. She just wants Twitter to pick a layout and stick to it.

Can they stop changing the twitter layout every 2 seconds? Like seriously, just make a new layout and push it live when it’s finished, not one bit at time

Katie Masters, who claims to be my big sister, is flat-out refusing to use her desktop to access Twitter as she can’t handle the bold letters on the left.

I SUPER DUPER don’t like twitter’s new layout. The left handed navigation bar is so huge it distracts and scrunches up my news feed.

Guess I’ll just be using my phone from now on b/c I can’t handle the INTENSELY BOLD LETTERING on the left.

It’s not all doom and gloom though. There are a few users who are fully embracing the redesign. Keith went as far as saying that he’s ‘loving’ the new layout, but does bring some constructive criticism to the table.

Loving the new @twitter layout (which is similar to a previous version) and it’s much faster. Still missing the option to do a hot edit though!

PJ on the other hand, replied with a much more to-the-point opinion.

John Hunter was anther fan of Twitter’s new direction and highlighted dark mode, which is great for night owls.

People don’t like change do they? But like sunset, and the prospect of another Fast And Furious film, it’s inevitable.