Home
News
US Reacts To ‘American Food Aisle’ In Tesco

US Reacts To ‘American Food Aisle’ In Tesco

Americans are reeling after seeing a photo of a ‘US food aisle’ in Tesco on Twitter.

In the photo a bunch of items can be seen including American chocolate such as Hershey’s and Reece’s as well as other sweet-treats like Nerds, as well as savoury items.

In fact, it was one such savoury item that caused a bit of an outrage, because apparently hot dogs in jars aren’t a thing across the pond.

Americans, I’m curious for your thoughts. This is our “American food aisle” in Tescos. Is this accurate to American food? pic.twitter.com/PAqcU8Vvkp
– (@YasmineSumman) July 4, 2019

One person wrote: “Hot dogs in a jar are an insult to American standards.”

A third added: “It’s not inaccurate, other than the hot dogs in a jar.”

At this point, Yasmine wadded in to try and clear up the matter, writing: “LEMME EXPLAIN THE HOT DOGS IN A JAR. They are pre-cooked, so you don’t need to cook them. Are Americans on about sausages? Because we have those too and they are raw, hence they are kept in our chilled food aisles.”

Meanwhile, other US folk pointed out that the baking soda was a bizarre addition to the shelves, alongside food, which is a fair point.

Some were more concerned with what was missing from the shelves, which does show a distinct lack of crisps – or ‘potato chips’, as our American pals would say.

So, that seems like a pretty mixed bag for the Tesco version of a US supermarket shelf, but then the whole thing kicked off again when someone else shared a photograph of a ‘British foods’ shelf in an American supermarket. 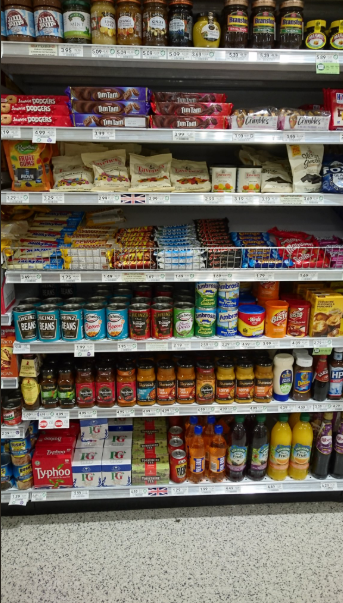 The ‘British aisle’ in a US supermarket. Credit: Twitter/@Tim_MonkF10Y

Now, speaking as a Brit, I can say that most of these items are familiar to me – HP Sauce, Heinz Baked Beans, PG Tips and Lion bars. Nicely done, US.

But the addition of the very Australian Tim Tams didn’t go amiss, while others couldn’t get their heads around the prices – ‘five dollars for a jar of tikka masala sauce?’ – fair point.

A second shocked Brit asked: “$4 for a packet of digestive biscuits!”

While a sympathetic UK-dweller added: “$2.49 for a can of beans? The poor Americans having to pay those extortionate prices for some beany goodness.” Saddening indeed.