Using Your Mobile Phone In The Heat Could Damage Its Battery

In case you hadn’t noticed, it’s bloody roasting outside. As you read this, you’re probably sat in an office, sweating heavily, trying to make it through the day without melting. But while you may be struggling to cope with the heat, spare a thought for your mobile phone.

Even though they’re designed to perform at high temperatures, they are also going to find it tough, with the summer heat set to reach record levels today.

Some of you may already have received a little message from your device telling you it needs to cool down.

A post on Apple Support’s website warns about the importance of protecting your device, saying: “‘Low- or high-temperature conditions might cause the device to change its behaviour.

The length of time I’m willing to spend outside very much depends on how long my phone is willing to last before overheating and today I’m anticipating 17 minutes
– kw (@kwouldsie) July 23, 2019

ㅤㅤㅤㅤㅤㅤ
u know it’s hot outside when your phone tells you it has to be turned off because it’s overheating.
– ✘ CleafKnows:tm: クロスウ:broken_heart: (@CleafKnows) July 25, 2019

The tech giant also states that if the temperature exceeds 35C, it could have an impact on your phone.

According to Apple, it’s very definitely worth not leaving your phone in the car or in direct sunlight for a prolonged period of time, and it’s at risk when using certain features such as GPS in the car or games.

But it’s not just iPhones – Android devices also have a limit. A spokesperson for antivirus company AVG, said: “Both iPhones and Androids are designed to function between 0-35 degrees Celsius (32-95 Fahrenheit), but exposure to temperatures outside of that range can have a negative impact on your phone’s performance or hardware.” 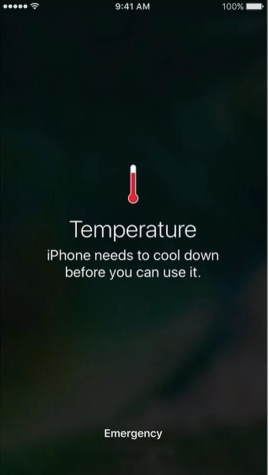 Some of you may already have received this gentle reminder to take care of your phone today. Credit: Apple

Phones are powered by lithium ion batteries which contain fluids that work through chemical reactions to power the phone.

However, when external heat is applied to the battery, the fluid starts to evaporate, potentially damaging the internal structure of the battery.

But if you find that your smartphone is struggling to cope with the heat, there are a few simple steps you can take to keep it cool. For example, just keep it out of direct sunlight, and try to limit charging time – even dimming the screen can help.

If all else fails, just switch to airplane mode or turn it off all together – for a short period at least.

So just have a rest from your screen and enjoy the sunshine.