If you’re yet to watch season one of You and don’t fancy having it spoilt, then click away now because there’s some major spoilers in this article.

Fans of super-creepy Netflix thriller You might be surprised to learn that Guinevere Beck (played by Elizabeth Lail) will be back for season two, given her untimely demise at the end of season one.

But that’s what Joe Goldberg actor Penn Badgley has hinted at in a recent interview. 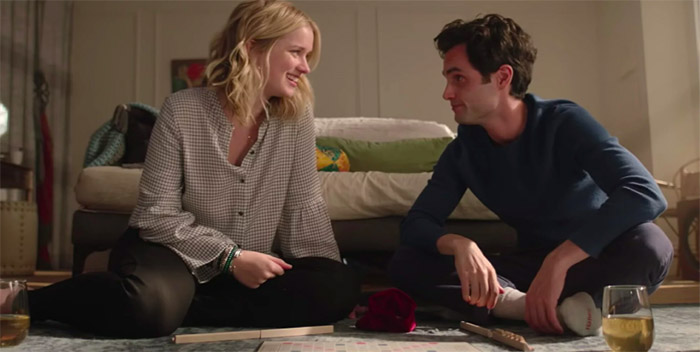 Speaking to ETonline, Badgley has seemingly suggested that Lail will be back on our screens in flashback sequences and they’re set to be pretty grim.

If you remember, viewers were spared the details of Beck’s death as it happened off camera, but Joe isn’t going to get away with it that easily, as his past will be back to haunt him.

He told the news outlet: “There’s a revisitation of that [the murder] with Joe in the second episode of the second season, where you get to see a bit more of the hard reality of what he did to her.”

“In his mind, she’s not even dead. I’m not giving you some kind of spoiler, she’s dead. In his mind, everyone’s still alive because the pain that he feels he suffered at their hand is very much still alive.”

It’s also been revealed that Haunting of Hill House star Victoria Pedretti will join season two. Pedretti will play a central role in the new season as Love Quinn – an aspiring chef working as a produce manager in a high-end grocery store.

1. @YouNetflix *will* be returning for a second season
2. the female lead will be played by Nell from the Haunting of Hill House!!!!!!
3. she will play an aspiring chef called LOVE QUINN
4. you have our attention pic.twitter.com/tGB260YkC2
– Netflix UK & Ireland (@NetflixUK) January 31, 2019

What isn’t yet known is whether fan favourite Dr Nicky, played by John Stamos, will be back.

Showrunner Sera Gamble told the The Hollywood Reporter she’s pretty keen though, revealing: “It’s too soon to say definitely whether John Stamos will return in season two, but we have been talking a lot about the character and we’re excited to keep telling that story.”

Season two of You is currently in production and an official release date hasn’t been revealed yet, but in the meantime you can catch all of season one on Netflix right now.